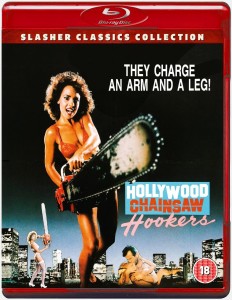 Synopsis:
Something is going on in downtown L.A. People are going missing, their hacked up body parts are the only things left to be found by the local police; leaving detectives at a loss as to what has happened to the rest of the remains. Meanwhile on the seedier side of town, a cult of chainsaw wielding hookers, led by a leader known only as The Stranger (Gunnar Hansen) -who preaches about ancient Egyptian Gods- might just have the answers they are looking for. Private Detective Jack Chandler (Jay Richardson) stumbles into dangerous territory when he picks up an assignment to find a young teen runaway Samantha (Linnea Quigley) and gets a lead in the form of the deadly sweet Mercedes (Michelle Bauer). Information isn’t all she’s offering though, as Jack is about to find out. As tempting as her proposal is, she’s more of a “love em and cleave em type”, and Jack’s just not into that. But with an important sacrificial date coming up on the cult worshipping calendar, he’s not going to get the opportunity to turn her down. Mercedes and her girls can be very persuasive, especially when their chainsaws do the talking for them!

Anyone picking up the film Hollywood Chainsaw Hookers who then later finds they may have cause for complaint, really only has themselves to blame. The name says it all, and never fails in its delivery of the promised goods. Director Fred Olen Ray, a filmmaker not associated with any form of restraint, delivers the core elements in his own inimitable sassy style- racking up plenty of tongue in cheek comedy, T&A and an ample splash of the red stuff; all delivered with a middle finger directed   firmly at the margins of good taste. What Olen Ray crafted in the process went on to become one of the defining cult epics of the decade. And guess what? It now gets to breathe an entirely new lease of life for UK fans, thanks to the medium of Blu-ray and this new release from 88 Films; in all its uncut, gory glory too.

There is something quite admirable about Fred Olen Ray and the punk rock spirit he injects into his own unmistakable brand of rough around the edges independent cinema- at its height here in Hollywood Chainsaw Hookers . Because, strip it down and you find the free spirited love and that special kind of utter glee found in the pleasures of  B Movie fandom, rampant throughout. There are no pretentions, and in an era now dominated by political correctness, and the need for meaning in everything, this approach is refreshing honest. It’s gleeful, fun, frolicking, and utterly enjoyable on a purely base level. In essence the perfect beer night film. But then any true fan can hardly complain when the film lays down many an iconic moment from the pairing of two top Scream  Queens, Michelle Bauer, and Linnea Quigley. Bauer- as the boisterous lead cult minion, Mercedes- pouts her way through her scenes; when clothed her modesty barely protected by her low-cut costume which appears hardly able to contain her *ahem* assets. The star’s bold screen presence further cemented into the hearts, minds (and not to mention possible night-time fantasies) of a legion of adoring fans for her appearance here completely naked- save for a waterproof shower cap- to carve up an unsuspecting punter with a chainsaw in particularly high camp fashion. As a mass of rubber body parts and arterial spray bombards Bauer’s naked form the actress goes peddle to the metal giving one of the most insane performances of her career.
The equally iconic Linnea Quigley gives her fair share of show stopping scenes as cute but naughty runaway Sam who comes fuelled with Linnea’s trademark feisty attitude; including one of her usual scene stealing entrances, here giving a cheeky strip in a bar. This proves to just be the warm up though, as the actress later gives her piece de resistance- The Virgin Dance of the Double Chainsaws. For this Quigley dons only a thong and some body paint, while giving a slinky dance with a duo of live saws before taking on Michelle Bauer in a chainsaw duel; this is as gratuitous, and not to mention as fun, as it might appear on paper.

In line with similar work that resulted from the pairing of  Quigley and Bauer  it’s worth mentioning Hollywood Chainsaw Hookers shares a likeminded vibe with other B-movie madness made around this time like David DeCoteau’s  Nightmare Sisters (1987) and his Sorority Babes in the Slimeball Bowl-O-Rama (1988). The three titles would certainly make a perfect triple bill!
Meanwhile back to the crazy hooker cult and Gunnar Hansen steps in as the nefarious and creepy looking leader. His link to the original Texas Chainsaw Massacre giving a sly nod to the theme from which Hookers brazenly modelled its name; Hansen presents himself as something of a pantomime villain in true “he’s behind you “style, upholding the carnival atmosphere of the piece. Jay Richardson as Private Dick Chandler gets the tastiest dialogue in noir spoof voice-over fashion, his words laden with oodles of double entendre and a respectable amount of “Dick” jokes just for good measure.

This BD release from 88 Films is worthy of the movies status as an underground cult classic. Not only is the restoration respectful of the original source material- and as a result does show minor evidence of age related specs here and there- but it looks better than ever upgraded into high definition. Most impressive is the inclusion of the full length, now legendary, home video classic Linnea Quigley’s Horror Workout. This piece was a particular favourite of fans of the diminutive scream queen back in the day, and provides a real blast from the past with its inclusion here. Linnea sets herself to task working out in a PVC studded bikini ensemble- complete with her lengthy demonstration of splits and stretches- before upping the tempo for a full aerobics set with a team of zombie cohorts to help things along. The actress also provides an audio commentary option for this feature. The documentary extras include a valuable retrospective with director Fred Olen Ray and stars Michelle Bauer and Jay Richardson who all talk about the film 27 years on. Plus the archive “making of” piece again proves insightful for fans and newcomers alike (providing an excellent snap shot of true low-budget filmmaking ).

The full extras package is as follows:

Overall, a smashing package for one of the highlights of late 80’s low-budget horror. Out now via 88 Films.