Synopsis:
A young film-maker documents a group of ghost hunters as they carry out  a routine investigation of a supposedly haunted orphanage, but they soon realise that the place is home to horrors they cannot imagine. 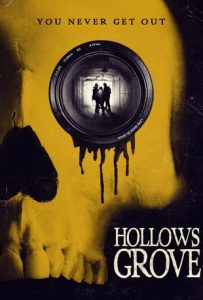 You’ve seen this film before; you’ve seen this film a thousand times. It’s another poorly written and dull journey through an abandoned building – this time it’s an orphanage –that sees a documentary crew getting killed off one by one by the ghosts that haunt the hallways. Of course they deserve it, because they openly admit that their show is a farce, a fake and a phoney. They’ve never seen a ghost in their lives. Until now, that is. There is a certain amount of irony present in these types of films now, where the characters are witnessing the events for the first time, but as an audience, we have seen this more times than we can count. Sigh.

If there is a petition to stop films like this from being made, then I would sign my name in an instant. Just how many more found-footage films about ghost hunters can we take? The market is flooded and horror audiences are drowning in a sea of familiarity and laziness. The sub-genre of found-footage is exhausted and so are the supernatural scares that cement the stories’ inability to muster up any ounce of creativity. Each film is becoming a copy of a copy of a copy. Rather than paying homage to the films they should be thanking or offering an intelligent comment on the aesthetic itself, far too many film-makers are weakening horror as a whole by reducing the genre and its style to a barrage of lacklustre frights and overall predictability. Rather than restoring their fans’ faith, films like Hollows Grove are cementing their tiredness and, let’s face it, their detest in found footage, ghost stories and the supernatural genre as a whole.

Hollows Grove is apparently the scariest film of 2014. This bold statement immediately rang alarm bells, because that’s the wonderful year of The Babadook and It Follows; arguably 2 of the scariest films of the DECADE, let alone 2014. Don’t get me wrong, if you find a cold wall, a disappearing wheelchair or the sounds of laughing children particularly terrifying, then go ahead, call this film the scariest film of the damn century. Every single “scare” that Hollows Grove sets up increases the frustration you will have with this film. From a man falling down the stairs – shock! – to the wandering little ghost children – please, no! – every moment of terror is executed with a whimper. Whether it’s a loud sound to accompany the scare or a sudden increase in the decibels of the characters’ voices, it all feels supremely average. As if the film-makers were grasping a horror paint-by-numbers colouring book or a “Horror Movie Making for Dummies”, Hollows Grove crashes into every single cliché and every single stereotype like they are running out of fashion. 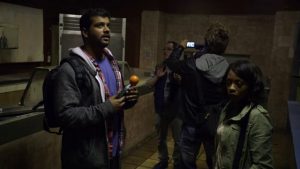 The characters themselves are a horrifying bunch of nobodies that are devoid of any fragment of personality. It’s difficult to differentiate between them because they all embody the same annoying clown trait as they make a joke out of absolutely everything. And I mean everything. Even when things begin to get spooky they dismiss everything and assume it’s their mate Bill (Lance Henriksen – what he’s doing here is beyond me) playing a prank on them. Bill is the reason for the show’s success, because he is the one behind the scares and creates the illusion of a haunting through good old-fashioned trickery. It is strange that the group admit to not having seen Bill AT ALL, but yeah, we’re pretty confident it’s Bill. Obviously, this all leads to a huge plot twist that you won’t see coming and certifies this film as one hell of a trickster itself. If only that were the case.

Rather than shock and surprise us with its ability to steer the audience in the wrong direction, Hollows Grove exposes the flaws and inadequacies in its script through its blatant predictability. Quite simply, the film sets itself up for a fall immediately through its similarity to past films that have an identical storyline. There are no real surprises, but it astonishing how fast the film moves when the supernatural incidents start happening. The painfully slow build-up is abandoned for break-neck speed as the characters are killed in, what feels like, minutes. The lack of creativity continues with the killing, because not one person meets their end in a way that will shock or stupefy. They get dragged off-screen in the initially petrifying, but now feeble, Paranormal Activity manner or they just drop from the ceiling unexplainably.

Hollows Grove is another tired and lacklustre, boring and ridiculous addition to the found-footage genre that will have you screaming in agony for all the wrong reasons. Avoid.