The story takes place in a small rural town where, all of a sudden, there is a humming that causes residents to develop nosebleeds and headaches. Every occurrence of the humming coincides with the appearance of large sinkholes, swallowing up residents and buildings. What’s more is that the residents are seeing phantoms, all representing something different depending on the individual – none of them friendly.

The sinkhole idea is interesting and relevant to me, living in Louisiana. A few years ago a neighbouring area was suddenly shocked by the development of a sinkhole. Bayou Corne and Grand Bayou communities saw residents evacuated and panicked. The sinkhole captured the public imagination. What would come out? Is the world going to sink into it? Of course, it turned out there was no supernatural element to it and it wasn’t actually the beginning of the apocalypse. The suddenness, unpredictability and speed with which sinkholes can gobble up structures makes them a great tool for fear.

The town survivors, led by Sheriff Bill Wozniak, attempt to leave the area while they still can, only to find themselves forcibly and violently quarantined by the military. Things only get worse from there as the military are seemingly no more in control of the situation than the townspeople. The theme of the military and the government being the villains of the piece is getting a bit old in my opinion. However, the quarantine was effective in heightening the tension and meant everyone was in constant danger from the sinkholes, with no means of escape.

It’s an interesting ensemble of main characters in the book. The town doctor, Janet, fulfills the other leadership role with love interest Bill, along with a pair of drunks, Fred and Charlie. Fred and Charlie are two underestimated men who find their purpose when the situation is bleak. One of my favourite characters was the town busybody, Ellen Simmons, who was entertaining in her constant complaining and vitriol. She reminded me of Marcia Gay Harden’s character in The Mist. All of the characters are likeable and well written with enough depth to make you care about them. 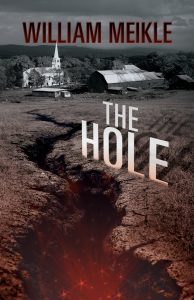 The plot of the book and the way events unfold makes this a suspenseful read. You know as little about the sinkholes and what might be inside as the characters in the book. It was impossible to predict what would happen next. Unpredictability in a plot is something I crave. All too often things are fairly signposted, but they are not in this case at all. As the story built towards a climax, our band of survivors fall into a sinkhole and end up confronting the truth about the phantoms. I felt a little disappointed with the conclusion. I felt that the book could have been longer and that there was more story to tell. It somehow felt rushed and a little too neat and tidy. The conclusion also suffered a bit with the nature of the antagonist and its lack of character or focus. The story didn’t meet the crescendo I was sure it would based on the previous three quarters of the book. Of course, there is a good chance that the author is saving it up for a sequel.