Who’s hungry for some micro-budget Norwegian vampire madness? Well, you’re in luck as Vidar the Vampire is on its way and, if the trailer is anything to go by, it looks really bloody good. 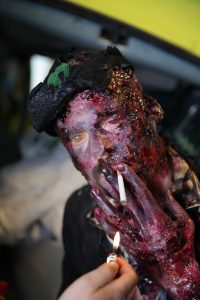 Produced by UFOh!, the film (original title: Vampyr Vidar) was written and directed by Thomas Aske Berg and Fredrik Waldeland, on a budget totalling around US $60,000. The film’s press release details the drawn-out production, as told by the filmmakers:

“We started writing the script in 2012, shot and edited a pilot in 2013, went back to the drawing board, and rewrote the script over and over from 2013 to 2015. The rest of the film was shot on and off from 2015 through 2016, while continuously making changes in the script based on the footage acquired. This on-and-off process of filmmaking was necessary due to seasonal based scenes and the fact that our core crew members were reliant on side jobs to be able to support themselves.” 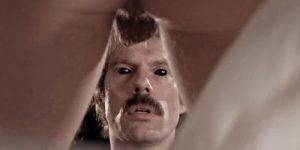 Synopsis:
Vidar Haarr is a 33-year-old, sexually frustrated bachelor farmer who leads a Christian, monotonous, and strenuous working life on his mother’s farmstead in the Western outskirts of Norway. In a desperate attempt to break free from routine, Vidar prays to a higher power to grant him a life without boundaries. Unfortunately, his prayers are heard, and Vidar wakes up one evening as the Prince of Darkness in sin city, Stavanger.

Vidar the Vampire will premiere at The Norwegian International Film Festival on August 23rd, 2017, followed by screenings at Germany’s Fantasy Filmfest and FilmQuest, USA, in September.