Synopsis:
A young doctor takes up residence in an isolated luxury tower block, but violence erupts as the class injustices inherent in the building’s rigid caste system lead to a revolt from those on the lower levels. 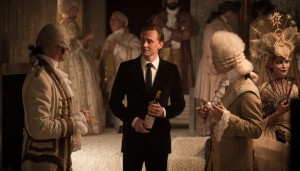 In an unusual move for me, I went into High-Rise virtually blind. I had seen none of the director’s previous work, caught only one early trailer and, for once, had not read the novel it was adapted from. So I wasn’t sure what to expect from Ben Wheatley’s slick retro-futuristic thriller, and I know I wasn’t the only one in that position in the theatre. People left scratching their heads as to how they should feel about what they had just watched, and to some degree, I was amongst them. 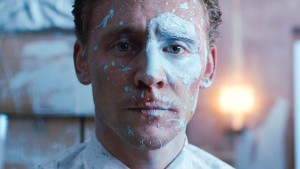 Tom Hiddleston (Crimson Peak) plays Dr Robert Laing, a well-off single man who moves into a flat on the twenty-fifth floor of the titular high-rise. Envisioned by its architect Anthony Royal (played by Jeremy Irons) as anticipating every human need, with amenities including a supermarket, gym, and swimming pool, the building becomes a microcosm of the nation, right down to its division of the social classes. The wealthiest live at the very top, with Royal and his wife occupying the penthouse on the fiftieth floor, while poorer tenants are confined to the lower floors and experience regular power cuts and limited access to public amenities. Laing finds himself caught right in the middle and not quite able to naturally integrate with either class. A beautifully surreal moment occurs after Laing is invited by Royal to a party in the penthouse, and steps out of the lift wearing a suit and tie, only to discover all the other guests dressed like French aristocrats and guzzling champagne while a string quartet plays Abba’s SOS. As commentary on the frivolous lifestyle of the wealthy goes, it’s deliciously on the nose.

The building is a character in itself, a towering example of the failure of post-war brutalist architecture in Britain, aiming to represent function and raw unpretentiousness in its concrete regularity, but ultimately appearing cold, oppressive, and prone to decay. The film delights in lingering on every grimy detail of this decay as the social situation rapidly spirals into chaos and the hallways start to fill with festering waste and human remains beneath the flickering lights. 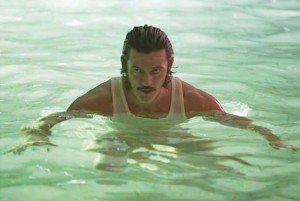 Where the film stumbles is in its depiction of the class warfare itself. Wheatley seems more interested in showing the aftermath of the battle than the battle itself, with arresting images of the public and private spaces falling deeper into decline beginning to replace a cohesive narrative as the film progresses. The breakdown of narrative structure does contribute to the anarchism on screen, but towards the end especially, it becomes increasingly difficult to determine where in the building we are supposed to be, or why a character from a lower level is suddenly serving food in the penthouse.

Luke Evans’ scene-stealing filmmaker Wilder is a loudmouthed voice of the people spurred on by the violence he’s helping to incite and attempting to document it, but with Hiddleston as the stand-in for the audience keeping mostly to himself within the walls of his own flat, it’s easy to feel somewhat disconnected from what you are watching. That being said, what you are watching will never fail to draw the eye, and Hiddleston’s understated performance hits all the right notes of the darkly comic and often deeply unsettling tone. The imagery is surreal and often dreamlike, lulling the viewer into accepting the madness of the residents’ reality, and Hiddleston shines in his straight-faced portrayal of Laing’s demented daily routine in the midst of this madness, still dressed in his now ragged suit and tie with trousers missing everything below the knee, writing notes about a patient in blue crayon.

J D Ballard’s cult novel of the same name was published in 1975, and Wheatley’s adaptation makes no attempt to modernise its setting. Sideburns and shag carpets abound, but part of film’s brilliance lies in its ability to feel simultaneously stuck in a past which has been left behind, and frighteningly current in its commentary on classism. When a housekeeper quits after failing to be paid, a member of the debauched upper class grumbles that the poor are obsessed with money, a comment that feels like it tumbled straight out of the mouth of certain modern politicians. The residents’ enduring yet evidently fruitless belief that things will get better once the power comes back on leaves the viewer with the eerie impression that they are still trapped in the high-rise’s imposing walls even after the credits roll. 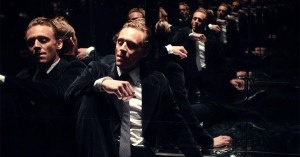