The anticipation around Hideo Kojima’s latest project is building, but the legendary game designer has confirmed that we’ll have to wait a little longer to get our bloody paws on Death Stranding. Development is slightly behind schedule while the team adjusts and playtests the mysterious game. 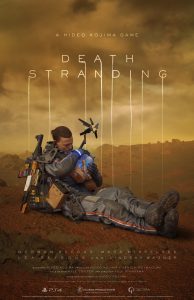 Kojima is known for his perfectionism and uncompromising vision, so this comes as little surprise. And with no hard-and-fast release date, it’s hard to say how much longer we’ll have to wait to find out exactly what Death Stranding is all about. Kojima Productions teased on Twitter in 2016 that the game would come out before the 2020 Summer Olympics in Tokyo, but only time will tell if a 2019 release is in the cards.

Death Stranding will be Kojima’s first game since his departure from Konami in 2015, and will be available exclusively for the PlayStation 4 (at least initially). While the evocative trailers don’t give much way, they promise environmental devastation, Norman Reedus (The Walking Dead) with a creepy baby, and Mads Mikkelsen (Hannibal) with tentacles, so expectations are high.