One of this year’s best – if not THE best – horror films is to be released on Digital, DVD, 4K Ultra HD and Blu-ray this 4th September. All the releases – except for Digital – will include 9 (that’s right, 9!) deleted scenes.

Although this isn’t quite the 3-hour cut that Ari Aster has teased – what I’d do to get a-hold of that! – it’s better than nothing. The extras will also include a featurette and photo gallery.

Hereditary has already become A24’s biggest opening, beating their impressive genre features The Witch and It Comes at Night. The only way is up for the distributor that continues to prove it releases some of the best indie flicks out there. 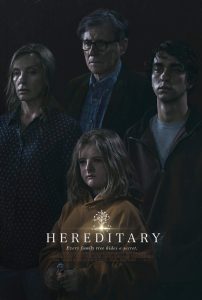 Synopsis:
When Ellen, the matriarch of the Graham family, passes away, her daughter’s family begins to unravel cryptic and increasingly terrifying secrets about their ancestry. The more they discover, the more they find themselves trying to outrun the sinister fate they seem to have inherited. Making his feature debut, writer-director Ari Aster unleashes a nightmare vision of a domestic breakdown that exhibits the craft and precision of a nascent auteur, transforming a familial tragedy into something ominous and deeply disquieting, and pushing the horror movie into chilling new terrain with its shattering portrait of heritage gone to hell.