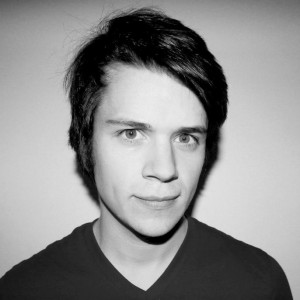 Writer/Director Mickey Keating (Ritual) attributes much of his love for genre movies to having watched faces come melting off in Raiders of The Lost Ark at the delicate young age of six. Ever since then he’s been fascinated by the world of cinema and this prolific young talent is clearly awash with inspiration with two films already wrapped and another all set to shoot in a couple of months. First up is his family ensemble thriller, POD which will be making its world premiere at this year’s SXSW as part of the Midnighters strand.

Starring Lauren Ashley Carter (Jug Face), Dean Cates (Ritual), Brian Morvant (Gotham, The Den), John Weselcouch (The Purge) and Larry Fessenden, POD tells the tale of estranged siblings Ed (Cates) and Lyla (Ashley Carter) who head up to their isolated family lake house to hold an intervention after receiving a mysterious message from their war veteran brother, Martin (Brian Morvant). On arriving, the snowy confines hide a terror far beyond anything they could have possibly anticipated.

SCREAM’s Howard Gorman caught up with Keating to find out what’s hidden deep in the basement in his latest movie and he was willing to spill the beans about his next two projects, Darling and Carnage Park…

SCREAM: With this being your first SXSW you must be excited and quietly daunted at the same time.

Mickey Keating: Yeah, we kind of just made the movie and sorted it immediately so I’m really excited to be able to see the film in this kind of crowd. SXSW is like all I’ve ever hoped for so I’m very excited for everyone to see the film.

SCREAM: POD is pitched as an ensemble family drama and you have said it’s a paranoid violent nod to The Twilight Zone, The Manchurian Candidate, The Andromeda Strain and even Silent Hill. Can you elaborate a bit about what the film deals with?

MK: I think what is so exciting and different about this movie is that it’s definitely a dive into the insane and it’s like a rollercoaster ride. Basically it’s about two siblings who try to have an intervention on their brother who believes he was subjected to government tests and experiments like in The Manchurian Candidate or William Peter Blatty’s The Ninth Configuration. So it’s really like an intimidating conspiracy film within the isolated and ransacked setting of a lake house in Maine. Then, quickly it spirals more and more out of control until the characters sort of lose control over the situation entirely and then it turns into a full on Silent Hill type nightmare.

SCREAM: The trailer makes the film look pretty violent although your producers say that it’s less of a violent slasher and more of a psychological thriller.

MK: It definitely has its moments and I think that I’m a really big fan of violence in horror films but it’s not over the top and I think that it’ll find a wider audience than you might expect for an ultraviolent film.

SCREAM: You worked with a fair few members of the cast before POD. Did you have them all in mind when writing?

MK: I had worked with Glass Eye Pix and also interned for Larry Fessenden while I was in college but, interestingly enough, I didn’t really have any of them in mind. Lauren from Jug Face and The Woman was a fortunate meeting and it was almost a coincidence and she read the script and really loved it. Then Brian Morvant plays the main crazy brother, if he is actually crazy or not. He was great and the stars just aligned with him. I had never met him before but he gave an incredible reading and he got the character. I told him that I wanted to create some sort of variation of Travis Bickle so he said he’d shave his head for this and we actually filmed him shaving all his hair off into a Mohawk. Basically the stars just aligned and I was extremely fortunate to get the cast that I did.

SCREAM: Were you very specific in terms of how you wanted the actors to follow your script or did you leave a lot of room for their input? I know as soon as you shot with Larry you couldn’t quite believe you were filming “that guy from Habit.” 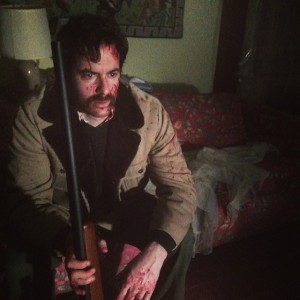 MK: Well it’s funny because the first twenty to thirty minutes of the movie moves in almost like a stage play to an extent; it’s very much dramatic dialogue that is boiling up until the explosion. My favourite director is Robert Altman and I love the idea that when an actor takes on a role that’s the character they become. So what I love to be able to do is to keep the camera rolling and just hang on to these characters and let them exist in the scene. If they hit every single line of dialogue that I write then that’s great, but if they want to do their own thing then that’s awesome and even better. Editing is a huge passion of mine and so I kind of knew what we’d be able to cut together and what not and that meant it was very freeing and it gave the film a lot of genuine moments.

SCREAM: You filmed in a summerhouse in Maine in the bleak midwinter. Is Lauren still talking to you? I read that was the first time in her life she had ever had to sleep in her socks.

MK: Fortunately I didn’t scare anybody away and Lauren especially because we did another movie together in November. It was FREEZING and we had to do a couple of night shoots where my eyebrows and my nose hairs froze and every single day one of the vans would get caught in the ice. Also, unfortunately, the house where we were shooting was a half mile up and down this insane driveway and always someone would get caught on there. It wasn’t easy but I feel like I’m part of the club of filmmakers who shot a movie entirely in the snow and it panned out fairly well.

SCREAM: And how did you decide on the house itself for the film? I believe it is owned by one of the producer’s stepbrothers.

MK: Basically the movie came about because I wanted to do almost like a Twilight Zone type movie where people are talking about an overwhelming fear like The Monsters Are Due on Maple Street or Will the Real Martian Please Stand Up? I’m a huge fan of Rod Serling but I was just hanging out with producer William Day Frank and he mentioned that his family had this lake house that is empty most of the year. As soon as I heard that something flipped in my brain and I thought that would be the perfect terrifying location for what I was trying to convey. I wrote the script really quickly in about two weeks and then we were off making it.

SCREAM: You had a slightly bigger budget compared to your previous film, Ritual. What did you find you spent that extra bit of money on?

MK: It was nice because, first and foremost, Ritual we only shot on weekends because no one could afford to quit their day job. This time I was able to have more time to shoot and I was able to go really heavy with production design and we were able to just go and completely ransack that house that looks disgusting in the film but we were able to afford that. I’m also a huge fan of long takes and I love Steadicam and this time I was able to use all that. We didn’t have a hundred days to shoot but I was able to take more time to really refine everything that I was going for and I really think it helped.

SCREAM: You mentioned you did another film with Lauren Ashley Carter which I believe is called Darling.

MK: That’s right. Darling is a black and white psychological horror film which is a nod to Repulsion and Eraserhead and Audition and the French film Trouble Every Day and one of Altman’s early films called That Cold Day in the Park. Basically I wanted to make something very different from POD and that is my attempt to make a surreal nightmare into madness, a drug trip of this girl who is alone in a four storey mansion in the Upper West Side of Manhattan. I think that film is going to surprise and trouble a lot of people because it’s very, very violent.

SCREAM: And then you are getting ready to shoot Carnage Park which I believe is a ’70s heist survival story. 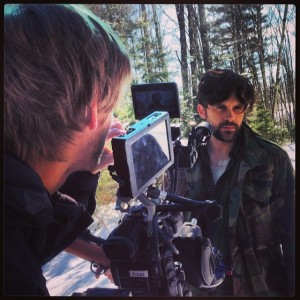 MK: Yes. We are set to start production in May so we are casting for that right now. That’s definitely my love letter to Sam Peckinpah and it’s a pulp, prime movie that turns into the most dangerous game. I think that horror fans are really primed for a return to very mean and vicious horror because I feel like we’ve watched so much supernatural stuff lately that I’m really tired of it. I want to make something that’s vicious and violent and very realistic so that’s what Carnage Park is going to be…

SCREAM: Thanks so much Mickey and we hope you have a great SXSW.

MK: Awesome. I appreciate you guys talking to me.

POD will be screening at the following times, dates and venues at this year’s SXSW:

In the meantime, we’ll leave you with the official SXSW trailer for the film together with an exclusive clip that takes us deep into the basement. 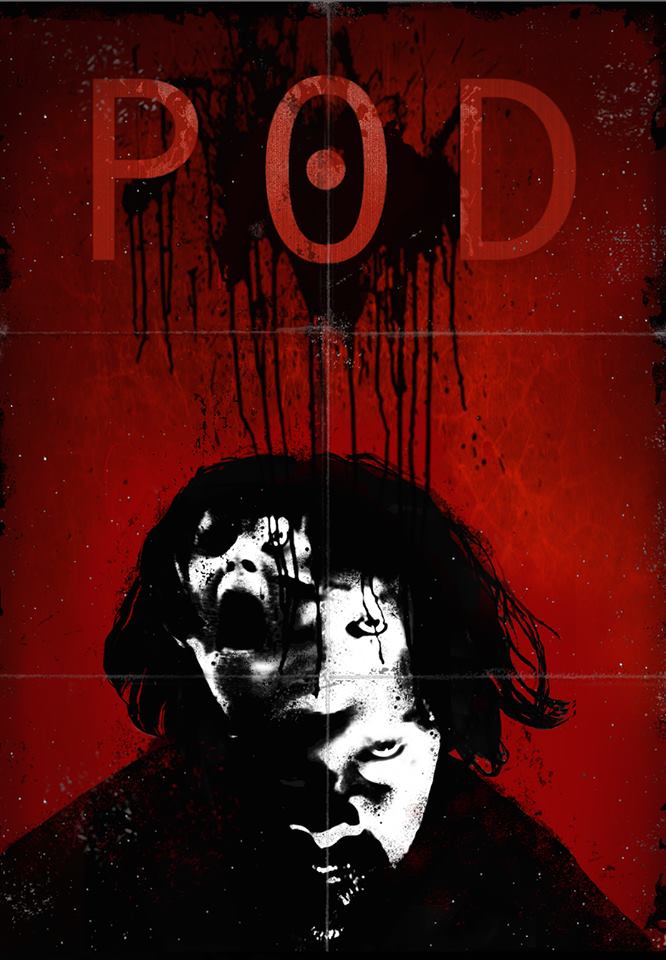 Be sure to keep up to date with Pod over on Twitter: @Pod_Movie