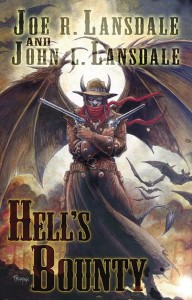 We start with shadows and wingy things at the belfry, and a wooden box containing red lights burning hieroglyphic-like inscriptions.

Quill has put many a man in Boot Hill cemetery, and as it happens a solitary woman, he’s our bad guy but he’s not your average bad guy. He’s possessed by something particularly nasty that wants to end the world as we know it.

Our bad guy come good guy is short fused bounty hunter Smith, he rolls into Falling Rock and sets off an explosive chain of events courtesy of the stick of dynamite he carries in his belt.

What’s the single most important, no hang on, vital consideration when throwing a stick of dynamite with the intention of blowing the bollocks out of something? Well, if it’s got a short fuse, then throw that fucker quick. Unfortunately Smith doesn’t heed that advice and his next port of call is a wheelbarrow of body bits in the bar of Hell’s waiting room.

Smith’s not done, in fact he’s regurgitated and immediately needed back up on the ground floor by Satan himself, the bartender from hell, the dead are rising at that behest of something old and evil, and Smith is the chosen one to save the day.

I enjoyed the first part of Hell’s Bounty, there was plenty of humour amidst the saloon patrons with some great characters like Payday and Double Shot as the story unfolded. The final battle sees the return of legends such as Jesse James, Wild Bill Hickok and Quantrail to assist with the horde of the dead but I lost interest as the story gradually descended into an all-out action zombie killfest storyline. Silver disintegrates these dead folks and there seemed to be shed loads of it about, more common than dirt. All told started off good fun but ended up a touch repetitive with nothing that stood out.