Synopsis:
The Hell Priest (aka Pinhead portrayed by Doug Bradley) returns to unleash terror on an unsuspecting city, with the help of some new Cenobites. It’s up to a young journalist to do away with him, once and for all. 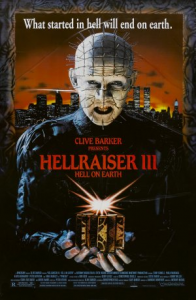 Sequels: Sometimes they can be better than their predecessors, other times they’re completely unnecessary. Such is the case with the third installment of the Hellraiser series, Hellraiser III: Hell On Earth. Not only was this an unnecessary endeavor, but also one with very few qualities about it. The first two installments had created a mythology, one that remains encapsulated within them to this very day. What Hell On Earth did was transform this said mythology into a franchise, and set a low standard for the many sequels that followed.

One of the elements that gave Hellraiser such an endearing quality was its gothic atmosphere and baroque storyline. In an era when the slasher genre was dominating the landscape, Clive Barker went against trends and gave the world something different. We were brought into a world of sexual obsession, sadomasochism, and terror on a supernatural level. Despite everything that’s changed over the past few decades, the first two entries still hold up, and continue to remain some of the most endearing horror films of all time.

Hell On Earth was a drastic departure from its predecessors. Everything that had made the first two films memorable and endearing was completely stripped away. The end result was a film that seemed to pander more to the teenage demographic of the early 1990s, rather than tell a good story that provided any continuity with the series. With a cameo from Armored Saint, and a soundtrack featuring KFMDM and Motorhead, it’s quite obvious to whom this film was intended for. 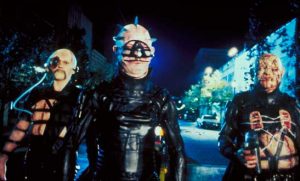 Of all of the problems that encompass this film, the most noticeable was the way the cenobites were utilized. Pinhead takes on a roll more fitting of a comical slasher villain, than a leader of a religious order. Spewing one liners, and indiscriminately killing off his victims in over the top methods. The production designs of the new cenobites themselves are almost laughable, and have more of an appearance akin to cheap Halloween costumes. Comprised of humanoids with Cd’s, cameras, martini shakers, and even power drills embedded in their flesh. They’re a far cry from the menacing Order of the Gash seen in the first two films.

As far as the story and plot are concerned, there isn’t much. For the most part, the film follows more of a clichéd slasher formula than an actual gothic story. The plot shifts around so much, that it’s impossible to get attached to what’s happening with the different characters. It also doesn’t help that the dialogue and practical effects just scream amateur hour. They’re horribly written, poorly executed, and easily forgettable. One saving grace is the performance of Doug Bradley. The veteran actor brings his talent to the dual role of the Hell Priest, and his human alter ego Captain Elliot Spencer, and takes his performance quite seriously. Truth be told, he seems to be the one person in this entire film that actually attempts to give it any form of validity.

As far as a Hellraiser film goes, it’s an unmitigated disaster, plain and simple. As a supernatural horror flick, it’s bland, boring, and a complete let down.