It’s no secret that I’m a huge Clive Barker and Hellraiser fan. Since I first read The Hellbound Heart and saw Hellraiser, they terrified me and captivated my imagination in equal measure. Ever since, I’ve been fascinated with the series and the mythos created around the Cenobites and this vision of sadist hell. Of all the films, I have the fondest memories of Hellraiser 2: Hellbound, even more so than the first one. I found Dr. Channard to be a horrific and merciless villain to rival The Engineer, who became known as Pinhead.

Yes, there have been some terrible sequels to say the least, but they all contribute something. In Paul Kane’s examination of the series they are covered up to part 8, Hellworld, the earlier movies rightfully earning the majority of the coverage. The most recently released instalment, Hellraiser: Revelations, came out after this book was printed, to pretty universally poor reviews, and lacked Doug Bradley’s presence as Pinhead. Fingers crossed that Hellraiser: Judgment coming out next year is an improvement.

In Paul Kane’s retrospective book, he examines the various themes that run through the films such as religion, visions of hell, sexual deviancy, and S&M. There are behind the scenes stories and histories of each film in the franchise, discussions of the characters, and actor interviews. It’s really interesting to read how plots and characters were originally intended to play out and how they changed in the final production. Doug Bradley (Pinhead) provides some of the most enjoyable insights. There are production and publicity stills and also included are some of Clive’s drawings, in black and white. I wish they were in colour, but they’re fascinating and impactful all the same. 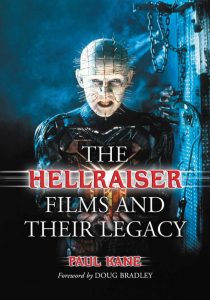 The book also covers other aspects of the Hellraiser world including merchandising like the collectible figures (I have lots!) and the comic series. On a related note, the Hellraiser comic series currently being put out by Boom! Studios is fantastic. The art is incredible and the stories advance the legend further and feel fresh and original. I can’t recommend them highly enough.

Paul Kane has put so much research into the book and that mixed with his passion for the subject really shows in the end product. This book is a no-brainer to buy if you’re a fan of the franchise, or even just the first two films. It’s entertaining, in-depth, and brimming with interesting facts.