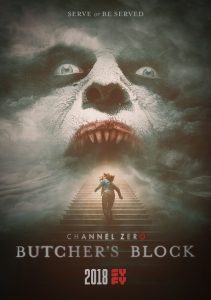 A hellish and brilliant poster has been unveiled for Syfy’s upcoming Channel Zero: Butcher’s Block and it shows a woman running up a sinister staircase to a terrifying face in the clouds.

In Butcher’s Block, a young woman called Alice (Olivia Luccardi) who learns that a series of mysterious disappearances may be linked to the strange appearance of staircases. Warned not to go up one if she sees it, it seems that Alice’s curiosity may get the better of her. We expect the top of the staircase to lead to a place far different to Wonderland.

Channel Zero: Butcher’s Block additionally stars Hobo With a Shotgun’s Rutger Hauer in the role of lead villain, Joseph Peach, as well as Teen Wolf’s Holland Roden, Brandon Scott and Krisha Fairchild. Nick Antosca returns as the series’ showrunner and executive producer, along with Max Landis. Vessels’ director Arkasha Stevenson will direct Butcher’s Block, which will be the fourth season of the popular sci-fi-horror show based on Creepypastas.

Butcher’s Block is based on Kerry Hammond’s Creepypasta tale Search and Rescue Woods.