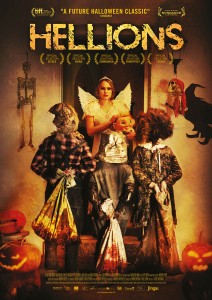 Synopsis:
A teenager must survive a Halloween night from Hell when malevolent trick-or-treaters come knocking at her door.

Bruce McDonald is best known for his previous film Pontypool, a tale of a zombie apocalypse spread by the spoken word set within the confinement of a radio station. Very creative and incredibly suspenseful, Pontypool really knocked me for six and I loved every minute of it so imagine how excited I was to be sitting down to watch his follow up.

Hellions stars Chloe Rose, Robert Patrick and Rachel Wilson and follows Dora (Rose), a rebellious teenager who finds out that she is pregnant. Wanting to avoid all sense of responsibility she decides to celebrate Halloween by going out to a party. So, after dressing up in her Angel costume, she eagerly awaits the arrival of her boyfriend until a malevolent group of monstrous trick-or-treaters come knocking at her door with the intention of taking her unborn child.

As a whole, Hellions fails to match Pontypool as it is clearly not of the same caliber. The plot is relatively simple and not too different from your average home invasion thriller. It tries to strive for originality by introducing a supernatural twist to the subgenre. Regrettably the execution of the plot devices and the treacherous pacing of the story combined with bleached out visuals marred the experience.

Thankfully redemption can be found in the performances delivered by Chloe Rose and Robert Patrick. Chloe did a wonderful job in leading the film and went the mile to make her performance wholly believable. Patrick, known to most as the relentless T-1000, plays the town sheriff who comes to her aid. Bringing a sense of mystery to his character, Patrick is very likable in the role and offers adequate support to Rose without overshadowing her.

Don’t get me wrong, the film is not overtly bad at all. It has some very nasty moments which will leave audiences squirming in their seats and the camera work here is great. Even the direction from McDonald is reasonably sound, but my problem lies with how the film changes between the first and second act. Once the demonic kids arrive the film is over-saturated with bleached tones. Yes, this may promote an eerie atmosphere but the artful approach removes everything scary about it.

Disappointingly Hellions lacks substance, its visuals are too bland and the storytelling techniques are just as plain. By the time the climax came around and the end credits began to roll, I was left feeling resentfully empty as I was expecting much more from the film.