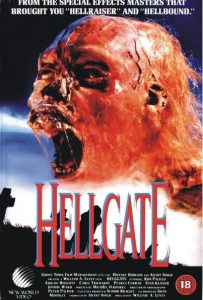 Synopsis:
A gang of holidaying college friends journey into a ghost town while searching for a missing member of their group. Once there they encounter a horde of supernatural beings linked to a mysterious legend about the murder of a local girl by a biker gang.

Hellgate is a latex beast and bad sex loaded b-movie which arrived in the early 90s, but this DTV speck, salvaged from video bin obscurity by Arrow, is hardly an era defining tour de force. Despite some spirited sequences and amusing effects, Hellgate is a vexing schlep for the better part. Spats of supernatural action dot the plot, along with common genre flaws which have since evolved into almost charming clichés. Chestnuts take the form of two dimensional characters, outrageous, clap-trap dialogue, flat performances and a trudging story-line but cult silage refiners Arrow Video provide a knife-sharp sprucing (proving that it is possible to polish a turd) and deliver three excellent documentaries as part of the Blu-ray’s Special Features. 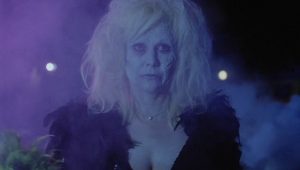 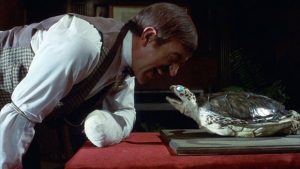 Director William A. Levey (Blackenstein, The Happy Hooker Goes To Washington) pumps the film’s action with a bracing, playful mayhem which slightly elevates the wafer thin story and kill-fodder characters. While endearing, Hellgate’s rubber creatures, fuzzy visuals and wonky, dream-like set pieces fail to compensate for its clumsy plot foundation. The story’s stale set-up introduces three friends holidaying in a cabin in the woods, one of whom (a douche called Chuck) attempts to scare the others by relaying a creepy folktale, while thunder and lightning crack the sky outside. The story then glides back in time for some clumpy exposition before disintegrating completely after a further forty minutes or so. Hellgate then dissolves into a twisted ocean of 80s lasers, ketchupy blood baths and awkward sex scenes. But, despite it’s crippling flaws, Hellgate still has some lively moments, cartoon-like paranormal sequences and fun but wobbly creatures. 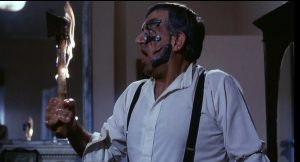 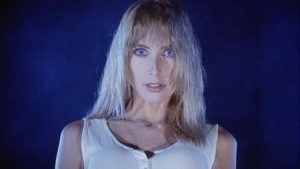 Latex monsters, dance sequences and a naked ghost at a barn dance turn up while a man with metal plates in his face mopes about all ominous and bats get twatted by twats with bats in attics. A key character discovers a crystal which has the power of restoring life to the dead (via a laser). After testing it on a goldfish which transfigures into a shoe-sized splotch just before exploding, the device is used on the departed daughter of a townsman, who returns from the grave with a supernatural sexual energy and homicidal tendencies. Hellgate’s standout sequence involves a screaming severed head in a fridge but Levey’s film resounds as little more than a vibrant clutter with a chasm of nothing beneath the surface anarchy. Hellgate’s achievements probably would have worked wonders within a stronger story-line with better developed characters, but it is still wonderful to see this kind of film restored to and presented in, a state which is probably superior to when it first arrived on crispy VHS, almost thirty years ago. 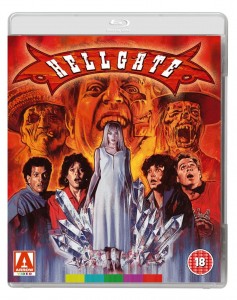 Arrow’s excellent extra features include; a 36 minute documentary called  “Road to Perdition, B movie style”: an interview with director William A Levy who discusses the realisation of Hellgate, how the script was re-written to fit the budget and what it was like filming in South Africa during the apartheid. “Alien invasion, Blaxploitation and Ghost busting mayhem” is a retrospective short in which film-maker Howard S Berger fondly discusses Hellgate, which he considers to be “the closest attempt to emulate a Lucio Fulci film”.  Finally, “Video Nasty” features Kenneth J. Hall (creator of Puppet Master series) recalling the 1980s DTV horror explosion which blossomed from 70s Grindhouse and died coinciding with the emergence of art-house/ indie cinema in the late 80s- early 90s.