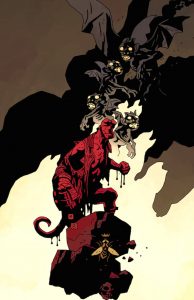 Though Guillermo Del Toro’s dream of a heady and lush Hellboy 3 is long and buried, Hellboy will still be gracing the big screen come 2018. Initially announced in May, the R-rated Hellboy reboot (once titled Hellboy: Rise of the Blood Queen) is finally set to film in September. Also, a new actor has been added to the already star-studded lineup: Sasha Lane, famously known for her role in American Honey, will play Alice Monaghan, a former human Fairie Queen whose predecessor was murdered by Nimue, the Blood Queen. In the movie, she will be able to hear the dead.

For those who are just hearing the news, there has been a lot going on with reboot, simply known as Hellboy. This will NOT be a continuation of Del Toro’s work, but instead a true-to-life reboot of the franchise and will feature a darker, bloodier story more akin to a horror movie. The script is being handled by Hellboy creator Mike Mignola and his writing partners from the Del Toro movies, Andrew Cosby and Christopher Golden, and directed by Neil Marshal (The Descent, Game of Thrones). Actors tied to the move are Mila Jovovich, Ian McShane, Sasha Lane, and Stranger Things star David Harbor as Hellboy himself after Ron Perlman passed on the project.

While there is no official synopsis yet, there are plenty of hints and rumours. The work will definitely feature the villainous Blood Queen, played by Jovovich, as the lead antagonist. There will also be appearances by King Arthur, Merlin, the witch Baba Yaga, and the Hellboy’s fairy enemy, the Gruagach, who much like the Baba Yaga, has crossed paths with the lead more than once in the comics. The film will be set in London and one sources has confirmed a scene with a giant tentacle wrapping around the London Bridge. Also, according to The Splash Report, there will be chopped heads a-plenty! This is definitely not your Del Toro reboot! Expect to see your BPRD favourites in the mix as well including Abe Sapien and Hellboy’s adopted father, Dr. Broom (McShane).