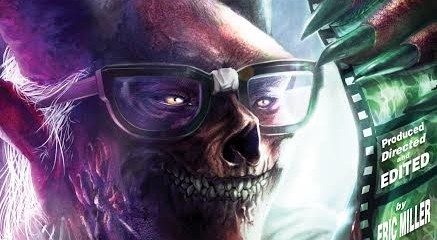 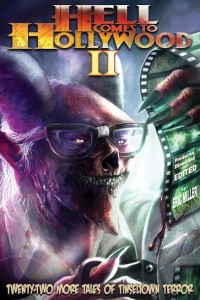 In HELL COMES TO HOLLYWOOD II, editor Eric Miller has again assembled a collection of stories about the horror business by folks who know the it best…directors, screenwriters, actors, producers and those who’ve lived the horrors of the business. The anthology jumps off with a short snippet of the great Richard Christian Matheson’s 1993 novel, CREATED BY that leaves readers hanging. Would have rather seen a new or rare story by Matheson to start things off. The types of tales and horrors that lie in these pages greatly vary not only in strength but in frights. Del Howison’s “THE LAST GREAT MONSTER” was a fun little read of a film crew attempting to document the remains of a mysterious beast and R.B. Payne’s “MEXICAN CLOWN HANDS”  tells of a series of murders that connect two Hollywood cops to a century of slayings, ghosts and buried secrets.

Multiple award-winning writer Lisa Morton gives us, “SHE-DEVIL A GO-GO” where a film star bombshell gets even with a director who is literally sucking the life out of his stars and writer John Palisano gives us “WELCOME TO THE JUNGLE”, a very fun and bloodthirsty story of a beginning actress who receives an invitation to star in a sleazy low budget horror film that turns a little too real for her. The stand out stories in this anthology are few, but they pack a punch. They include SHARKNADO director Anthony C. Ferrante’s “THE CRIMSON MARQUEE” (an enjoyable ghost story) and screenwriter Daniel P. Couglin’s “FROM SCRIPT TO SCREEN” (a sweet revenge story told by a Hollywood screenwriter). Hal Bodner’s “HOT TUB” is deservedly currently nominated for a Bram Stoker Award and in it a Hollywood hopeful makes bloody sacrifices of young men to a hut tub that takes on a character of it’s own. Trust me, this tale is better than it sounds…it’s delightful and disturbing and wonderfully written.

The true highlight of this book is it’s diversity of writers. Not only are we treated with veteran short story writers and Hollywood screenwriters, but we get to see the talents on the page of those we normally only see on the screen or in movie credits. INSIDIOUS actress Lin Shaye offers her first published story “CAREFUL WHAT YOU WISH FOR” and WWE star Katrina Leigh Waters gives us “ONCE UPON A TIME AT THE HORROR HOTEL”. Another excerpt that’s included is of TV Producer Doug Molitor’s novel FULL MOON FEVER.

While the thrills are as if they came from a B-horror movie, I still recommend HELL COMES TO HOLLYWOOD II. Editor Eric Miller crafted a collection representing fun stories of the truly dark side of the movie business…Hollywood’s ghosts, tales of revenge and the great lengths people go to get their script produced or their name in the credits, the sex, sleaze and the blood spilled in order to make it in Hollywood. It’s all here, Grab some popcorn and enjoy the frights!