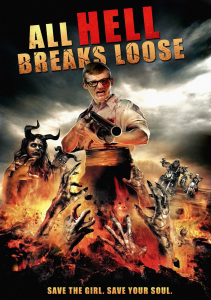 Synopsis:
All Hell Breaks Loose is the story of love, leather, and violence. When the Satan’s Sinners, a vicious motorcycle gang from hell, kidnaps one man’s bride, they bite off more than they can chew. Now the man is out to save his wife, any way he can… even if it means dying over and over again. With the help of a shit-kicking sheriff, a perverted priest, and a cowboy who just might be God, all hell is bound to break loose.

I predict a riot!

The story is set around a motorcycle gang from Hell called Satan’s Sinners. On the hunt for virgins to sacrifice, they manage to sniff out a couple of females, one being a chick called Bobby Sue (Sarah Kobel Marquette). Unlucky for her, she had literally just got married to her dorky looking partner Nick (Nick Forest) – who weirdly resembles a cross between Pat Healey and Simon Pegg. But before the wedding could even be consummated, Satan’s Sinners slay Nick and take away his woman on motorbike.

Then miracle beyond miracles, God, who comes in the form of a cowboy dressed in white and smoking a fat cigar, mysteriously resurrects Nick so he can take back his wife and put an end to the Devil’s evil plan – Grrrr *shakes fist*

All Hell Breaks Loose is one hell of film. It is crammed right to the brim of rambunctious bloody violence that entertains with motorcycle madness at full throttle. Set in the style of Grindhouse exploitation flick, first time director Jeremy Garner has done a wonderful job of breathing to life into a top class script that was written by the ‘Vocabulariast’. The script is tight, well written with some amazing one –liners that are executed perfectly by the actors.

I absolutely loved this film for all its unequivocal blood lust, bad jokes, naked girlie action and over the top characters. These characters are so superb that they even come with ridiculous names like Paedophile Pete, Sundown and Ratso. One gang member is called Clarence (Ehren McGhehey) and he truly believes that he is Elvis. He was so annoyingly irritating that I couldn’t help but laugh. Not entirely sure, but I’m wondering if he was called Clarence because of Clarence Worley from True Romance, whom we all know was a massive Elvis fan? Just throwing it out there.

One of my favourites of them all is the bad priest who lusts after big-breasted congregation members and stuffs a wedding veil down his pants. He is such a bad priest that he is a great priest. 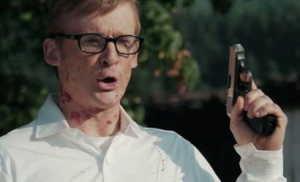 All Hell Breaks Loose provides everything you want in an independent movie. There are some filmmakers out there that simply try too hard to be typically indie or Grindhouse, but with this one, it all seems to come very naturally and is definitely not forced in any way.

If I were to rate this with other movies of the same ilk and calibre, it would have go with the likes of Machete, Planet Terror and The Editor. I cannot love this movie enough.