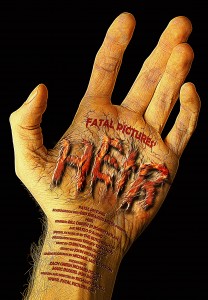 Synopsis:
After connecting with a stranger of similar interests online, family man Gordon and his young son Paul embark on an ill fated road trip in which Gordon aims to indulge in a secret passion. Before the day ends a horrible truth will be uncovered and a harsh lesson will be learned.

This disturbing yarn – brought to us by the team that served up the equally perturbing short films Worm and Familiar – is a welcome addition to that rare breed of ambitious and thought-provoking spine-chillers. Both Worm and Familiar shone a light on the atrocities of the human condition and in Heir, writer/director Richard Powell yet again handles taboo subjects with the utmost of tact, this time sliding child abuse under the microscope as the topic is adroitly reflected allegorically as a creature feature. Heir is certainly the kind of movie 2004’s The Woodsman would have turned out had Nicole Kassell gone for a more supernatural spin. It also shares similarities with another recent genre great, He Never Died, in which we see Henry Rollins battling his cannibalistic cravings ultimately for the sake of his daughter’s safety.

Exec. producer Zach Green certainly deserves a hefty pat on the back for his casting choices with the two leads dominating the screen as perfect adversaries; one the sinister devil’s advocate and the other the putative scapegoat. Robert Nolan puts in a vulnerable and empathic performance as Gordon, clearly caught up in a personal tailspin, whilst Bill Oberst Jr.’s portrayal of Denis is as creepy as they come. The minute we meet Denis in the diner it’s so apparent something is disturbingly off and he’s machining something sinister in that head of his.

The other protagonist of the short is the special effects wizardry of Ryan Louagie of The Butcher Shop as he musters up memories of the likes of Cronenberg’s The Fly or the more recent creature feature, Benson and Moorhead’s Spring. Just like the actors themselves, the makeup team provide the short with some disturbingly convincing and startling moments when the transformational body-horror rears its ugly head.

Michael Jari Davidson’s cinematography is second to none and, combined with Christopher Guglick’s hypnagogic score, if you walked into the short halfway through you’d think this was a full-scale feature-length movie. If there are any producers out there looking to turn a short into a full-length movie then this is about as big a hint as I could give…

Heir is certain to have you wincing, not just because of the special effects on show, but also because of the hard-hitting underlying message Powell wants to get across to the audience. Ultimately, the short pushes the boundaries in terms of ambition and originality and ends on the perfect note, leaving you with some serious food for thought by alluding to our genetic predisposition to sociopathic tendencies.