It just wouldn’t be the festive season without the name ‘Krampus’ appearing in the title of a new horror flick. Out on US DVD and Blu-ray next week is Mother Krampus which, rather than a tale about the folkloric, child-punishing demon’s old mum, is actually based on the story of a different yuletide nasty. In Eastern European legend, Frau Perchta was the name of a Christmas witch described either as a horned, Krampus-like demon, or a woman dressed in white with two faces. Perchta would reward good little girls and boys at Christmas, but if you were bad, you’d likely get your organs and entrails removed and replaced with pebbles and straw.

Anyway, below is the cover art and trailer for the film, which previously went under the title 12 Deaths of Christmas. It stars Tara MacGowran (Fox Trap, The House on Elm Lake) as the title character, with Claire-Marie Fox, Faye Goodwin, Tony Manders, Michelle Archer and Oliver Ebsworth. James Klass directed the film, his second feature following The House on Elm Lake. 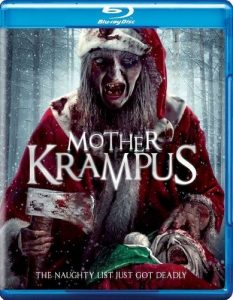 For the 12 days before the Christmas of 1921, children went missing near the local towns woods. A traumatized girl was found, but her mind had gone – she later died of her horrific injuries. Just before the Christmas of 1992, a further five children disappeared again. Their bodies were found in the same woods. Angry and seeking vengeance, the locals hung a woman they believed to be the killer. But before dying, she cursed the town that one day the Christmas Witch, Frau Perchta, would come for them to avenge her death. 25 years later, the story has become little more than a local myth. But as children start to go missing again, everyone begins to wonder if the tales of a curse might be true. This Christmas it’s not only the children that are in danger, it’s the adults too.

Mother Krampus will be checking her list from November 7th.