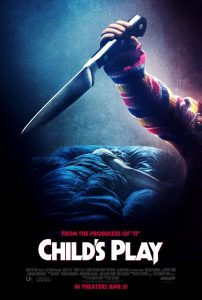 Orion has dropped the first full trailer for Lars Klevberg’s Child’s Play remake, and it doesn’t hold much back. While everybody’s best friend till the end is kept largely largely in the shadows, we do get a real sense of the havoc Chucky will wreak.

In this modern-day retelling, the talking Good Guy doll of the original franchise has been swapped out for a Buddi doll, which can connect to and likely manipulate various smart home devices (because that couldn’t possibly end badly). Gabriel Bateman (Lights Out) plays Andy this time around, with Aubrey Plaza (Life After Beth, Parks and Recreation) starring as his mother.

The kills look pretty vicious, and Mark Hamill’s voice seems perfectly fitting for the diabolical doll. But will this remake hold a candle to the 1988 original—or will it prove definitively that you don’t fuck with the Chuck?

Child’s Play will be released on June 21st, 2019. Unbox the full trailer below.