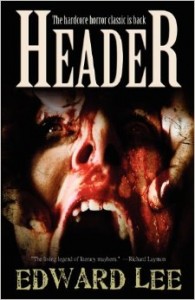 Header is a story of sheer depravity set in Russell County, centred on the hill folk or rednecks of Kentucky and family revenge going back decades.

Travis Tuckton finishes a lengthy prison sentence and returns home, there’s not much of his family left and the only place left to turn is his Grandpappy and his dilapidated cabin. Two more insanely immoral characters you will not come across again as they reminisce over the past and embark on a campaign of vengeance for all the slights done to their family over the years.

The story also follows federal cop Stew Cummings, whose sick girlfriends medical bills force him to turn against the law and to top it off he’s got a bunch of seriously sadistic murders to investigate. Bodies dumped in the local area, victims of a Header and redneck violence never looked this perverted before, I assure you. Cummings and the rednecks are destined to meet and it’s not going to be pretty.

What’s a Header, you must be wondering – seriously you don’t want to know, sick, really twisted, yes and yes definitely, this goes as far as you can think it’s possible in the realms of depravity.

Repulsive, disgusting, there’s loads of words of similar colour to describe the goings on in this story but Lee captures the atmosphere, the setting and the almost hypnotic characters perfectly, the dialect adds to the mix to create an absorbing read but it’s not for everyone. In fact unless you like the sicker side of horror give this a miss. Edward Lee is one of the kings of extreme horror and Header comes with a severe warning and a stomach lining you might not hold on to.