He Wants You To Watch This Latest The Gallows Clip 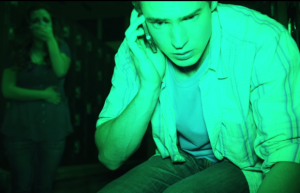 If you’re looking forward to the release of The Gallows, then you should also listen when “he” wants you to in the latest clip for the eerie and unsettling film. It seems there is an ominous “he” coming for someone and if it’s Charlie, it doesn’t sound like a happy ending is in store.

The Gallows is directed by Chris Lofing and Travis Cluff and was to originally be released by Blumhouse, but now New Line Cinema will release the film on July 10th 2015.

Synopsis:
Students at a small town school believe they are doing a good deed by honouring the death of another student, 20 years previously, by resurrecting the high school play that sadly led to his demise. Whilst the students prepare for the anniversary show, they begin to realise they might have just made the worst mistake of their lives.