Synopsis:
Jack’s in a rut. Depression and severe anti-social behaviour has whittled down his existence to sleeping and watching television. Seeing the human race as little more than meat with a pulse, Jack has no interest to bond with anyone. There’s little purpose for him to make friends with someone he’d eventually eat or outlive by more than a millennia. The fuse is lit when Jack’s past comes back to rattle him. Jack must now walk a tight rope of sobriety and try to eat as few people as possible in this violent tale of personal responsibility.

Before sitting down to write this review I tried jogging my memory to come up with the names of some previous darkly-comical cannibal movies and it was quite the brain-wracking experience. Milestones certainly include Cannibal! The Musical, Eating Raoul and Parents but we’re talking of films that date back over two decades so you can appreciate just how much the He Never Died concept piqued my interest, and rightly so. Whilst I adored the recent mockumentary, What We Do in the Shadows, He Never Died is an all new pedigree which successfully blends peek-through-your-fingers savagery with superlatively inane comedy; both predominantly provided by Henry Rollins’ cantankerous and austere misanthrope, Jack.

Whilst Rollins didn’t believe Krawczyk handpicked him for the lead role, it makes complete sense to me that he did. Rather than the affable and confident immortal characters we so often see in these kinds of films, Rollins provides an immaculate portrayal of a downtrodden and grumpy curmudgeon who couldn’t be any farther detached from the world around him. This was such an astute way to go about Jack’s character because, if you think about it for a second, the gift of eternal life is never going to be all it’s cracked up to be once you’ve had to endure century after century of heartache and woe.

The supporting cast are so damned delectable too. This is particularly the case with his teenage daughter, Andrea (Jordan Todosey) who shares a surprisingly immense chemistry with Jack even though they don’t initially identify with each other. Also, despite his extreme standoffish personality, it’s clear Jack harbours secret feelings for a local waitress, Cara, played outstandingly well by Kate Greenhouse and the interplay between the two of them is simultaneously hilarious and touching. I can’t even begin to imagine how difficult some of those scenes must have been, especially with Rollins having to convey his feelings towards Kate without being able to let even an iota of emotion actually seep through the cracks.

Whilst I wouldn’t say the film is an all-out gorefest it certainly has its fair share of stomach churning moments when Rollins tucks into some particularly exquisite cuisine; some of the goodies he chows down on are downright disgusting and the fainthearted will find it hard not to avert their eyes. Kudos to Rollins for his sheer devotion to the role as he does some stuff that most actors would straight up refuse to do.

The film also brims with genius little comical touches that keep the laughs coming such as the use of a jazz soundtrack slap bang in the middle of a full on gory action scene or the hilarious inclusion of bingo. Talking of bingo, Krawczyk has unquestionably struck the jackpot with He Never Died as it’s an inspired, gruesome, violently funny and, at times, truly touching take on the subgenre. With talk of a spin-off series and news that Krawczyk has pretty much scripted an entire first season, I have much faith that we’ll soon be enjoying a weekly dose of Jack for years to come. Other than that, this new facet of Rollins in a leading role is something that I can absolutely get used to and I hope he can too. 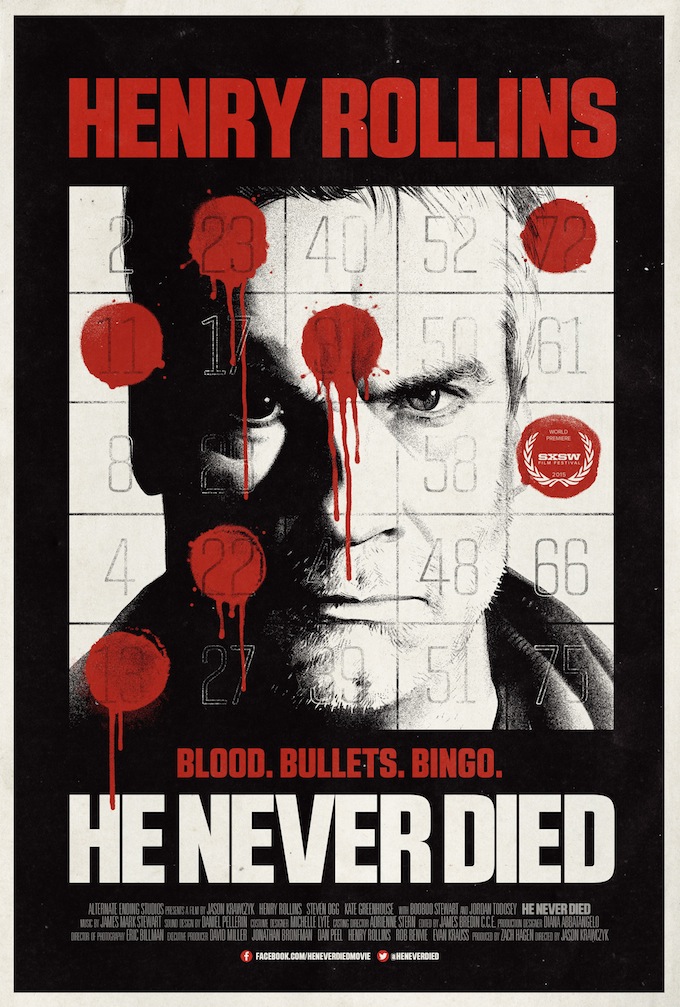