Fans of slow-burn, procedural horror have been titillated by clips for HBO’s Sharp Objects since the first trailer drop during the Season 2 Premiere of Westworld. The wait ends this Sunday.

Based on the novel by Gillian Flynn, Sharp Objects features Amy Adams as Camille Preaker, a big-city reporter investigating a pair of murder/mutilations back in her home town. Adages like “You can’t go home again” immediately spring to mind, as do feelings that small towns harbour dark secrets.

Check out the trailer and synopsis for Sharp Objects below. 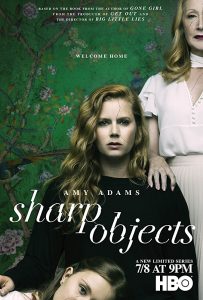 Synopsis:
Based on the book by the author of Gone Girl, from the producer of Get Out and the director of Big Little Lies, Amy Adams stars in Sharp Objects, a new 8-part limited series. Follow the story of reporter Camille Preaker (Adams) who returns to her small hometown to cover the murders of two preteen girls. Trying to put together a psychological puzzle from her past, she finds herself identifying with the young victims a bit too closely.

Marti Noxon is the showrunner for Sharp Objects, which is produced by Jason Blum and directed by Jean-Marc Vallée. In addition to Adams, the series stars Patricia Clarkson, Chris Messina, and Eliza Scanlen. Sharp Objects premiers on HBO this Sunday, July 8th, at 9 PM ET.