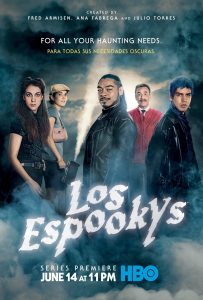 Los Espookys, HBO’s Spanish-language horror-comedy, haunted screens earlier this year with its strange and hilarious inaugural season. Following a group of friends who create a business out of their love of horror movies (something I’m sure we all aspire to), the oddball series sent up everything from exorcisms to ghost hunting. And HBO must have been happy customers, because they’ve ordered a second season for 2020.

Season one of Los Espookys was made up of six half-hour episodes. The cast included Bernardo Velasco, Cassandra Ciangherotti, Ana Fabrega, Julio Torres, and Fred Armisen. There are no plot details yet for the second season, but we expect more spooky shenanigans.