HBO Max is developing a feature film adaptation of Throttle, a novella by Stephen King and his son Joe Hill. 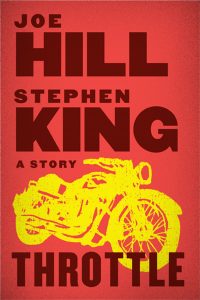 The novella, which was the first collaboration between King and Hill, was first published in 2009 as part of the Richard Matheson tribute anthology He Is Legend. It follows a biker gang that runs foul of a murderous truck driver on an isolated road in the Nevada desert.

The project is still in the early stages of development. We’ll bring you updates as we hear them.