The official poster art is here for Mike Flanagan’s The Haunting of Bly Manor, which will hit Netflix sometime this autumn. 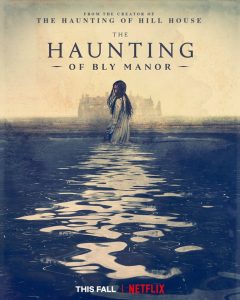 Following on from The Haunting of Hill House, which was loosely based on Shirley Jackson’s novel of the same name, The Haunting of Bly Manor will adapt a number of Henry James’ ghost stories. While James’ classic 1898 gothic horror novella The Turn of the Screw will provide the backbone of the season, Flanagan has noted that Bly Manor will also draw on stories like The Jolly Corner (1908) and The Romance of Certain Old Clothes (1868).