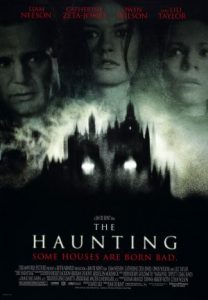 A doctor, looking to investigate reactions of fear in a group dynamic, conducts a study in a house that’s allegedly haunted under the guise of an insomnia study. Joining him is a young woman named Eleanor, who has just been forced to leave her mothers’ house, and three others. As paranormal occurrences begin to happen within the house, it’s beginning to become known that she might be linked to some of the homes dark history.

Director Robert Wise and author Shirley Jackson are two names that need no introduction. Instantly recognisable to any connoisseur of fiction or film, their contributions in both fields are without compare. Wise’ 1963 cinematic adaptation of Jackson’s novel The Haunting Of Hill House, simply entitled The Haunting, is undoubtedly one the greatest horror films of all time. A psychological thriller that probed the depths of the human psyche, it set a standard for psychological horror, which few films have ever come close to matching. If real horror is what you don’t see, then The Haunting is the living embodiment of that statement.

The film was remade in 1999 by cinematographer/director Jan De Bont (Twister), much to the dismay of fans who hold the original movie and book in high regard. Although most remakes generally aren’t as well received as their predecessors, it’s very seldom when one contains no redeeming qualities. That’s the case with this version, there’s nothing good that can be said about it, and it can easily lay claim to being the worst of all time. 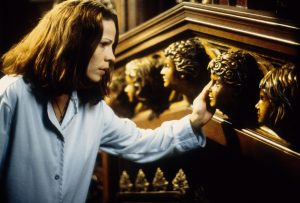 On the surface, one might expect The Haunting to be simple ghost story. However, Jackson’s book was much more than that. Although taking place amongst four people in a haunted house, that was only a fraction of the tale. It chronicled a young woman’s slow journey into madness, and her inability to differentiate between reality and her troubled psychosis. It’s a well-written character study of someone slowly spiralling out of control. Much of what made the original work so well was that the terror relied on someone being unaware of what was real, or simply a delusion. It forced you to come up with your own conclusions. Weather or not the occurrences in the mansion were supernatural or not was completely a matter of personal interpretation. De Bont’s updated version strips away this crucial element, and leaves us with a bland story that’s completely uninvolving, without any of the intriguing aspects found in the original source material.

What stood out the most about the remake are its poorly rendered CGI effects. Aside from being completely unconvincing, they hinder a large amount of the story. Relying more on cheap jump scares than psychological terror, we’re treated to a shoddily constructed visual schlock fest. What made the original so great was it obscured the truth from you, and it made you constantly question what was real, or simply a delusion in the head of the protagonist. Because the remake establishes early on that the ghosts are real, and the house is actually haunted, any suspense is eliminated immediately. The remake chooses to focus more on the house, rather than the people occupying it, which is just one more nail in the coffin. The bulk of the film simply becomes a showcase for boring moments and horrible design. The films lead; played by Actress lily Taylor, doesn’t come across as a tortured individual, and her performance seems lifeless and uninspired. The rest of the cast, that include Liam Neeson and Catherine Zeta-Jones, who have given great performances in other films, turn in bland performances, and are just as forgettable as everything else you’ll find here. Everything seems so far removed from both the book and the original Wise film; which begs the question weather this remake deserves the title it carries.

When aspects of the original story do make their way into the story, they’re barely noticeable, and not utilised to their full potential. Even when you take the fact that it’s a remake out of the equation, it’s still a terrible effort, completely forgettable, and not worth viewing. You’re much better off with watching the original film, or reading the book. Either one is worlds ahead of this lacklustre adaptation.