THE HAUNTING OF BLACKWOOD: Film Review 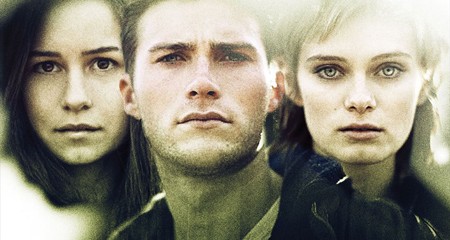 Synopsis:
Three strangers encounter one another at a secluded forest cabin, each with different reasons for arriving. No matter how much they try, the group cannot escape the cabin. As they discover a secret and realise they are somehow interconnected, they must journey straight through a mind-bending nightmare for survival.

I have lost count of just how many times contemporary horror movies include the almost mandatory technological shortcomings of protagonists mobile / cell phones devices. “Oh no… I have no reception”;“Oh no… My battery’s run out”; “Sorry, but no phones past this point”.  And so on and so forth. You may as well erect a neon sign on set with the words ‘bad things are gonna start happening to these guys soon!’ But then along comes a movie that you honestly wish at least ONE of the characters would make a “cell phone” reference so the mystery could be unravelled and we could race toward the end credits quicker than the 85 minute run time allows!

THE HAUNTING OF BLACKWOOD (released in the US as ENTER NOWHERE) starts in interesting fashion. Kevin (Christopher Denham) and Jody (Sara Paxton) have a badass automobile and an attitude to match. The lovers passionately embrace before embarking upon an armed robbery of a convenience store. As the cash register is nervously emptied by the shop keeper, Jody’s greed draws her attention to the rather ornate looking safe behind the counter. Although warned that she “wont like what’s in there” she proceeds with her demands. The tense standoff culminates in her panicked finger squeezing the trigger dictated by a deafening gunshot and white screen…

We then cut to some woodlands, one can only assume the very location of the title. Samantha (Katherine Waterston), a dark haired female in her late twenties with an unusually formal class to her attire, is hurriedly scampering through the woodland.  What her predicament is we do not now but she soon stumbles across a seemingly abandoned cabin, whose contents within do little to feed her optimism.

She soon makes the acquaintance of an axe man who appears at home at the cabin.  But it transpires that their quandaries are remarkably similar. Whereas her and her husband’s car has run out of gas en route to her in-laws, he, Tom (Scott Eastwood), has gone one better and succeeded in actually crashing his vehicle!

It was at this very early point of the proceedings that the alarm bells started to ring a little. Not only did Tom look remarkably clean and shaven for a guy that had been stuck at this cabin ‘with no bathroom’ for a couple of days, he also seemed quite content to simply inhabit the austere abode with bag of bird seed as his only source of sustenance.

Samantha didn’t add much plausibility to the piece either. Despite doing a great job of looking exceptionally petrified throughout the opening scenes. She too seemed quite content to follow Tom’s lead and simply stay in the bleak surroundings of the cabin.

Of course it’s not long before Jody makes the couple a trio, suddenly appearing on the cabin’s doorstep in an unconscious state. Having a spiteful attitude (complimented by copiously used middle finger gestures!) afforded the dialogue time to simply meander along with mundane petty squabbling as oppose to anyone actually addressing the situation at hand.

It at least kicks the trio into action and off they set with Tom suddenly realising if he siphons the gas from his crashed vehicle into Samantha’s empty one they maybe, just maybe could find a solution to their problem.

Needless to say he is incompetent enough to simply fall over and lose the fuel which in turn is the cue for a massive ‘Blair Witch’ type dilemma whereby the wandering troop keep finding arriving back a the cabin no matter where they walk. (Jean Rollin’s Requiem for a Vampire still remains the best example of this ‘all paths lead back to the start’ but I digress..!)

The odd ‘hallucinogenic nightmare’ flashback experienced by the trio signalling that some nefarious fate was waiting for them did little to stoke my interest. But in fairness the second half of the movie faired a lot better. A fourth character is introduced (of whom if I reveal you will be entering Spoilerville central) and its around this point that the movie does develop a little pace. Some tension is actually forged and the narrative itself, while not completely unpredictable, does have a bit of a psychological head spinning quality to it when it starts to twist and turn.

Unfortunately before we get to this point the movie is laden with flaws. Had I not have been reviewing this there is a fair chance I might well have given up halfway through such was the combined perplexities of mundane dialogue and the implausibly stagnant passiveness of the protagonists.  I was left pondering whether or not the ‘pay off’ in the movies conclusion actually redeemed it or indeed whether it was just welcome relief that this tedious flick had finally ended!

Metrodome’s watermarked screener disc presented the movie in its original 1.78:1 anamorphic widescreen aspect ratio with its Dolby Digital 5.1 soundtrack admittedly being quite effective when called upon.  The disc contained no extras to comment on which I was not about to complain about…