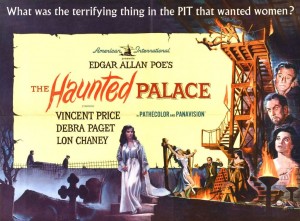 Synopsis:
Set in the 19th Century Charles Dexter Ward (Vincent Price) and his dutiful wife Ann (Debra Paget) arrive in the town of Arkham to a less than warm welcome from the locals. Ward has recently inherited his great, great Grandfather Joseph Curwen’s estate- a rambling castle on the outskirts of the town; a place that unbeknownst to the couple harbours a deep, dark past. It would appear Ward’s decendent Curwen was a warlock and necromancer, feared by the community and finally executed by burning for his crimes of dabbling in the occult. Curwen’s final words were to curse the inhabitants of Arkham and the future lines of their families, and as a result many of the town’s people for generations to come have been born afflicted with horrific physical mutations. Ward and his wife ignore all the warnings and take up residence at the old ramshackle estate. But old Curwen has unfinished business with the people of Arkham. Now with Ward installed in the family home Curwen is able to reach out from beyond the grave and use his bloodline to finish what he started and bring his legacy of evil to its final terrifying conclusion.

The sixth film in the Corman/Poe cycle and another departure for director Roger Corman, this time changing the literary basis for his tale to another author altogether and moving from Edgar Allan Poe to H. P Lovecraft. Although the film was marketed as an adaptation of a Poe tale it has been well documented that this was something Corman was not aware of at the time of shooting- a fact which is also confirmed from the horse’s mouth so to speak on the extras of this Blu-ray package from Arrow. However this is not the only time A.I.P have been guilty of somewhat shady marketing techniques when it comes to Vincent Price films and their association with the gothic scribe. Just five years later the Tigon/A.I.P collaboration Michael Reeve’s Witchfinder General (1968) was sold to US audiences under the Poe related title The Conqueror Worm, despite the film’s contents having nothing to do with the original text of that name.

The story for The Haunted Palace is derived from Lovecraft’s short story The Case of Charles Dexter Ward, and comes adapted by scriptwriter Charles Beaumont. Beaumont makes good use of all the central facets of the original text, while bringing some of Corman’s usual gothic tropes into the fold. As a result we have something of a hybrid film, a dark brooding gothic piece with all the glorious twists that a Lovecraftian subtext allows- warlocks, elder gods, the Necronomicon, possession,  resurrecting the dead, mutated townsfolk and a strong element of dangerous insanity. Beaumont, an adept scriptwriter, uses the central premise of a possession to really draw out some dark edged themes which for the time were quite close to the knuckle, such as, although not explicit, implied rape and an undercurrent of domestic abuse.

What is most notable about the film, and what makes it stand out from the others, is the visual aspect. Corman for the most part keeps his usual look and feel of creepy castles, fireplaces, haunted paintings, lavish period costume, yet takes things to another level with The Haunted Palace. As a result we are presented with a fog drenched landscape that seems to be shrouded in perpetual darkness, a tone that mirrors the film’s dark hearted message. The film inhabits a ghoulish and eerie character and takes on a strong otherworldly vibe. Interestingly this film came out the same year as Mario Bava’s seminal Black Sabbath and the two do seem to share a similarity when it comes to an emphasis on lighting and tonal quality- although Bava takes things much further as was his signature with many of his films, there is some similarity between the two. The strong ambience is further supported by Ronald Stein’s dramatic score.

For the cast it almost goes without saying Price is perfect in the dual role of Curwen/Ward, flipping between the two faces of good and evil effortlessly. The weak and misguided husband character he portrays in Ward contrasts strikingly with his performance as the Machiavellian Curwen; the latter wonderfully snide and twisted in his wicked ways. Debra Paget steps in as wife Ann making for a glamourous co-lead, in this her last feature role before taking early retirement at the age of 30. While the rest of the cast all play out their smaller roles to compliment Price as the star, it is the coming together of two horror icon giants that remains the most interesting fact about the cast. Lon Chaney Jr. as the ghoulish Simon Orne, sidekick and servant to the sinister Curwen is, as always, fantastic in his part- and the two actors work in perfect symmetry making it a joy to watch two craftsmen in the genre coming together on-screen.

Arrow have released The Haunted Palace as part of their limited edition Blu-ray collector’s edition boxset Vincent Price Six Gothic Tales. But never fear if you have missed out because this little gem is also getting a standalone release to Blu-ray/DVD combo early February 2015.

For fear of repeating myself when it comes to the discs in this set we have yet another beautiful restoration courtesy of Arrow with some interesting extras included.  The picture, especially the exquisite use of mood lighting and colours, really come to life in high definition. While the detail is so meaty you can almost map out the lines in Lon Chaney Jr’s face. Having had to weather this film in lesser quality for many years I am happy to say it is a joy to see it get such a fantastic upgrade.

The disc comes with the following specs and extras:

•  High Definition Blu-ray (1080p) presentation of the feature, transferred from original film elements by MGM
•  Original uncompressed Mono PCM Audio
•  Optional isolated music and effects track
•  Optional English subtitles for the deaf and hard of hearing
•  Audio commentary by Vincent Price’s biographer David Del Valle and writer Derek Botelho
•  Kim Newman on H.P. Lovecraft, a look at the relationship between Lovecraft and the cinema, and the challenges of adapting his work
•  A Change of Poe, an interview with Roger Corman
•  Stills and Poster Gallery
•  Original Theatrical Trailer
•  Reversible sleeve featuring original and newly commissioned artwork by Matthew Griffin
•  Collector’s booklet containing new writing on the film by Roger Luckhurst, illustrated with original archive stills
Again another triumph for Arrow and a treat to see one of the lesser celebrated, but nevertheless underrated masterpieces to come out of Corman’s ‘Poe’ period, take its UK debut onto Blu-ray in grand style. Highly recommended to all fans of classic gothic horror.