Synopsis:
Todd and Rebecca, a couple who move into a new home, discover a fiery spirit that is longing to be set free. Their journey with the entity unravels a terrifying truth which gets darker and more sinister the closer they get to laying the spirit to rest.

The Haunted gets off to a shaky start as it leads you to believe that it’s going to be just another haunted house tale. There’s a fiery – literally, it’s a girl on fire – spirit haunting the basement of a couple’s new home and it is up to them to discover the truth behind her death, laying her to rest.

The story hits many familiar beats; there’s an unexpected pregnancy, mysterious hand prints and nightmares that prove something creepy is going on. It’s a narrative that we’ve all seen before and a title that doesn’t pose much promise, but for all its clichés and similar steps down the haunted horror stairwell, The Haunted throws in enough twists and turns to prevent it from being entirely familiar. Yes, there is that typical rush to research the history of the house and its past residents, which we’ve witnessed in about 1,982 other horror films, but the piecing of the puzzle and the ultimate reveal is worth wading through the film’s more uninspiring moments. What we are left with is a fiercely surprising, smart and nicely woven twist that makes The Haunted a ride worth taking. 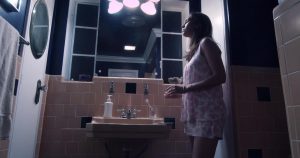 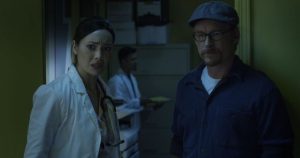 All is certainly not what it seems with The Haunted and there is a clear desire to subvert expectations. There is a refreshing play on gender roles in the narrative that deviates the film from stories that tend to follow the woman’s obsession with the supernatural and her challenge to convince her male other half that something spooky is going on. The Haunted presents the couple as equals, neither being more convinced of the haunting than the other, so avoids a chain of events that can sometimes be painfully predictable.

There is particular a strength in Rebecca (Emily O’Brien)  that is missing in Todd (Adrian Gaeta) in Todd, which draws attention to writer-director Zack Ward and co-writer James Cullen Bressack’s familiarity with horror film tropes and the expectations of their audiences. The reason for the couple’s house move lies in Rebecca’s ever-changing medicine career, so she embodies a control that would typically be associated with the male breadwinner. Todd also suffers the most from the effects from the haunting when he is hospitalised, which further emphasises Rebecca’s capabilities in juggling her career and the emotional torment of the paranormal activity. As a subtle commentary on the female psyche and its ability to cope under supernatural and natural pressures, The Haunting paints a thoughtful portrait with its characterisation of a modern, newly-wed couple. 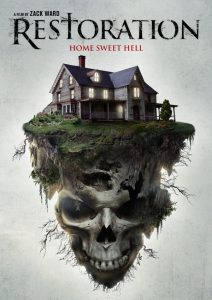 In terms of frights, The Haunted is light on delivering skin-prickling scares, but makes up for this lack of horror in what still remains to be an entertaining mystery. The film fails in terms of sending shivers down the spine of its audience and its moments of fright are where the film succumbs to cliché. The lights go out which calls for a trip to the basement, and ghostly figures hover in hallways, all to the sound of an ear-piercing score that will bring about as much surprise as the visuals on screen. A more creative approach to this horror film’s scary set-ups would have warranted more praise, but it’s lack of lingering terror and effective jump scares prevents it from being truly admired.

The Haunted never fully deviates from the cliches of haunted house horror films, but there is a clear desire to bring something new to the table. It may not be the scariest film of the year, but The Haunted is an entertaining ride into something remotely new, making its 90-minute runtime a breeze and, honestly, that’s good enough for me.