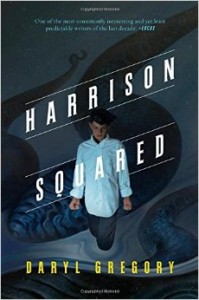 Harrison Harrison the fifth or Harrison Squared, so named as a bit of a family tradition is 16 years old and about to be dropped off for his first school day at Dunnsmouth Secondary school in the curious little town of Dunnsmouth. Opting to stay with his Mother who is rocketing into her latest adventure and obsession, the fuckmongus and very giant colossal squid.

The opening chapter begins with tentacles and teeth, at three years old Harrison nearly lost his life. He describes the memories, fragmented and reconstructed to fit the traumatic moment his Father was killed and he lost his lower leg, saved by the only thing left in his little world, his Mother.

Back to the present, strange things occur, something is not quite right with the town of Dunnesmouth and it starts with the eccentric behaviour of the kids at the school. Pretty soon the bizarre, turns to calamitous when his Mother is lost at sea in a pelagic tragedy.

In comes Aunt Sel, who is definitely not parent material but still managed to be one of my favourite characters, a looker, a drinker, a spender and caring in a not too fussy kinda way.

Things are afoot in the caves under that school and that’s beside the swimming lessons, cult worshiping and the odd monster. Bring on the bone carving knife of the Scrimshander and possibly the best name for a bad guy I’ve ever heard. Rescue is the name of the game, friends come from where you least expect and the villains of the piece are, well, bloody big.

Harrison Squared is a very well written and entertaining story, if I was to categorize it, I’d say a YA urban fantasy with a pretence toward horror and there lies my only issue with this story. It was like a toned down prelude to the author’s first story set in this world, the excellent We Are all Completely Fine and that was a bit of a shame. Almost like an episode of the A-team but with school kids, loads going on, lots of action, explosions aplenty but no-one ever dies, they do of course but you get my drift. No-one swears, I never felt uneasy and the darkness alluded to was barely touched.

Recommended for people who like young adult fiction and it’s interesting to read the main characters backstory but if like me you’re after something more, something a bit darker then it might not be for you.