Talking in a live Q&A with fans last week, Death House director Harrison Smith revealed much about his upcoming film (dubbed The Expendables of Horror), including when we can expect to see it, and his plans for a long-running franchise.

Smith, who chatted to SCREAM in the current issue, confirmed during the Q&A (broadcast through the film’s Facebook page) that Death House will be with us in early 2017, likely arriving sometime between January and April. A distributor is yet to acquire the rights, with post-production not yet completed. It’s a fair bet that there will be no shortage of offers however.

When asked about further Death House films, Smith confirmed that: “there are five sequels planned. We have the script for the second one pretty much done, and we’re getting everything ready to really ramp this up for an entire franchise. The way Death House ends, it’s totally set up to further the adventures of Cody Longo and Cortney Palm.”

Longo and Palm play special agents Jae Novak and Toria Boon, who are trapped inside a government prison holding the most violent criminals in the world when the power goes out during a tour of the facility’s nine levels. The two agents must fight to escape, with the inmates – some of whom may be supernatural – all released from their cells. 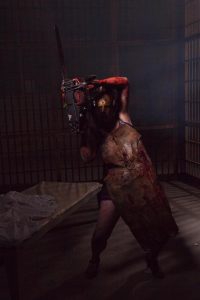 “We have certain actors from the first film that will return for the sequel,” Smith said, before mentioning his hope that Robert Englund will be available for Death House 2. “Do we want Robert in the sequel? Absolutely. And we hope we’ll have him.” Englund’s schedule meant he couldn’t sign up for Death House and in that cast, the Elm Street legend is notable by his absence.