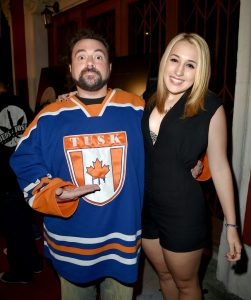 Harley Quinn Smith has, unsurprisingly, been cast in Kevin Smith’s next horror endeavour Killroy Was Here. The film will be an anthology feature and shooting for the film began in Florida last year. The news comes courtesy of a picture shared on Smith’s Twitter page.

Harley Quinn Smith has previously starred in Smith’s Yoga Hosers and Tusk features, so it’s no surprise to see her cast in her father’s latest genre offering.

Details on the film are, so far, scarce but we do know that the film will focus on a baby-eating monster that lives in the swamps of Florida. Smith has described the creature as:
“The Golem, the Boogeyman, and the Grim Reaper combined.”

So, that’s exciting. And pretty terrifying.