Happy Death Day Gets a Home Release in January

Happy Death Day was a ton of fun when it was released earlier this year, so we’re pleased to report that it won’t be long before you’ll be able to watch it again. The film will be heading to DVD and Blu-ray on 16th January 2018, after being released on the app Movies Anywhere on 2nd January. Happy New Year, indeed.

We thought Happy Death Day was an intense mash of Final Destination and Groundhog Day that wore its inspirations proud, but still managed to be craft a well-paced, exciting and surprising horror film. It’s well worth a watch if you didn’t manage to catch it in cinemas.

The full list of special features on the DVD and Blu-ray are as follows: 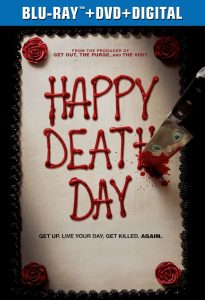 Alternate Ending
Deleted Scenes
Cupcakes & Killers
You’ve Killed Me!
Tree’s Final Walk of Shame
Worst Birthday Ever
Behind the Mask: The Suspects
The Many Deaths of Tree

Happy Death Day follows a young woman who wakes up on her birthday, only to be killed by a masked assailant. Every time she dies, she wakes up again and again and again. The only way to break the cycle is to find out who her killer is, or so she hopes.