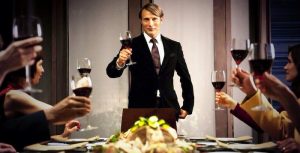 Fans of Bryan Fuller’s critically acclaimed Hannibal have been feeling a little famished since NBC made the unpopular decision last year not to renew the horror series after its third season. Fuller has stated since that discussions about a potential fourth season to be aired on another platform can resume in August 2017 when a tangle over rights issues can be resolved, and the fannibals have made it clear that they have no intention of leaving the dinner table just yet. Luckily for us, Hannibal’s masterful food stylist Janice Poon has just the thing to whet our appetites while we wait.

Feeding Hannibal: A Connoisseur’s Cookbook is slated to be released by Titan Books on October 18th, and will be debuting at New York Comic Con on October 9th, with both Poon and Fuller in attendance. A follow-up to Poon’s mouth-watering blog ‘Feeding Hannibal’, the cookbook will contain a collection of recipes inspired by the show, alongside artwork, anecdotes, and behind-the-scenes photos from the set. From the sneak peeks released so far, the presentation of the book looks just as stunning as any of the dinner parties on the show, and we wouldn’t be surprised to see Dr Lecter himself rifling through its pages for inspiration if he gets that coveted fourth season.

With every episode dripping in lavish blood-soaked decadence, Hannibal was always a feast for the eyes. Now fans can recreate the feast in the comfort of their own kitchens. That being said, Hannibal the Cannibal earned himself a cell in the bowels of the Baltimore State Hospital for the Criminally Insane when people found out the, um, human cost of his dinner parties, a cautionary tale for any aspiring cannibals out there. In an interview with Scream last October, Poon assured us that her recipes have been adapted to cater to ‘law-abiding cooks and vegetarians as well’, which will certainly make it easier for us to find the necessary ingredients at the local supermarket. I’m not sure Tesco carries leg-of-Gillian-Anderson or clay-roasted-Eddie-Izzard…

A favourite with fans for her dedication to the show and the artistry she brought to the table, Poon is currently working with Fuller again on his highly anticipated television adaptation of Neil Gaiman’s American Gods. Scheduled for a 2017 airdate, American Gods will reunite many Hannibal cast alumni, including Gillian Anderson, Jonathan Tucker, and Demore Barnes. Given Poon’s divine power to make us drool over dishes we know we shouldn’t in Hannibal, we can’t wait to see what magic she conjures up for the gods. 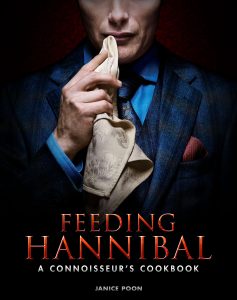 In the meantime, we’re delighted to see that interest in Hannibal shows no signs of dissipating, more than a year after its (ostensibly) final episode aired. With its first series now available on Netflix in the UK, a collection of vinyl mini-figures released in June by Titan merchandise, and a collectible Lecter figurine being produced by designers Threezero, there are plenty of goodies to tempt fans while the show settles comfortably into revered cult status. Poon’s cookbook is set to be a must-have addition to fannibal bookshelves while we wait for a revival, and given how highly the cast and crew praised her cooking on set, we can’t wait to have a stab at recreating our favourite dishes from the show for ourselves.

Feeding Hannibal: A Connoisseur’s Cookbook is available for pre-order now. Just make sure you don’t leave it out on the coffee table when you invite guests over for dinner. They may get the wrong idea.