Synopsis:
Comic book artist Jon Lansdale (Michael Caine) loses his hand in a grizzly car accident then subsequently finds himself stalked by the mouldering, severed organ, which also proceeds to kill everyone who angers him. 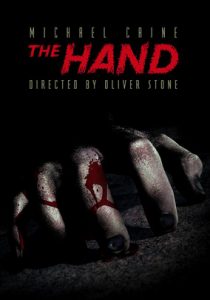 Primarily known for his war epics (Platoon, Born on the 4th July, Heaven and Earth) and stretched political biogs (Nixon, JFK, W), Oliver Stone’s pithy fling with horror back in 1981 seems like an implausible faux pas when compared to his later more sober and serious works. But The Hand wasn’t Stone’s first feature as a director. It wasn’t even his first horror film. The controversial film-maker made his directorial debut back in 1974 with a little seen b-movie called Seizure, which told the story of a horror novelist whose fictional characters come to life to torment his family. Stone then went on to win an Oscar for his Midnight Express screenplay in 1979 before returning to the genre one last time with The Hand: his second directorial effort. Based on Stone’s script adaptation of Marc Brandel’s novel The Lizard’s Tail, The Hand was also Stone’s first commercial/ studio feature but is a far cry from his more illustrious productions.

Michael Caine robots through the role of virulent artist Jon Lansdale, soaring into rage waves mostly targeted at his wife Anne (Andrea Marcovicci) while young daughter Lizzie (Mara Hobel) dots the backdrop. After a sedate opening credit sequence with scrawling hand-written titles and a churning James Horner score, we are introduced to the couple before bloodshed ensues. Jonathan is deprived of his right (drawing) hand during a cracking near car collision, interspersed with a couple of claret sprouting stump shots and model Caine bellowing. Sadly, the story then wilts into a tedious, ill-toned, relationship drama. This marathon schlep charts Jonathan’s “recovery” while he adjusts to the organ loss and has a prosthetic hand implanted (a mechanism which more resembles the T-800’s bony metal mitt than Ash’s in Army of Darkness). 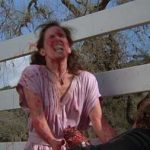 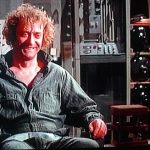 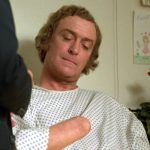 The couple’s marriage briskly deteriorates as the problems they faced, prior to the accident, resurface forcing Jonathan to move to Saraville where he takes up a teaching position. Jon befriends a bearded, beer swigging Hillbilly called Brian and has an affair with a student named Stella (Annie McEnroe, who later went on to marry the film’s producer Edward R Pressman). Following a massive fall out with his publisher, who employs a new artist to change his comic-book creation, Mandro: “You don’t cut the balls off of Superman” (the art featured in the film was by Marvel scribbler Barry Windsor-Smith), Jonathan’s dreams become haunted by surreal black and white visions of his missing, reanimated organ. 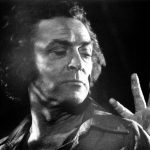 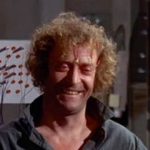 The Hand is a fumbled schlock/ body horror and a wretched, ham-fisted second feature for Stone, with slipshod effects, shoddy performances and a story that judders lost between horror and tepid family drama. There’s an amusing b-movie concept at its core, similarly marketed as the 1960 horror/ crime flick with the same name (which it is not related to), but Stone’s film fails to lighten up, find its style then slide into an appropriate comfort zone. The story wallows in stiff character drama which sits gauchely with the horror facets. Stone uses a real-life stump double for close ups and rarely resorts to the long-looking arm with fist tucked up sleeve technique. There is an intriguing reference to Jon still being able to feel his phantom fingers which could have been extrapolated further as a curious link to the real-life phenomena/ supernatural scenes, but serious moments fuse gawkily with the silly stuff. A cat eats a lizard’s tail then jumps through a window, Oliver Stone cameos as an angry, hollering drunk and Jonathan is subjected to some odd mind-altering experiments that morph him into a frizz-headed, goggle-eyed, salivating, wire sprouting man cabbage. As fun as this all sounds, The Hand remains a cruddy little stinker that’s both cosmically botched and shockingly boring. 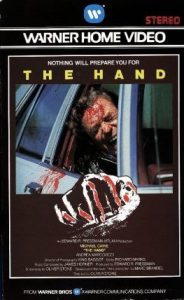 Extras:
Surprisingly Stone hasn’t disowned The Hand, as James Cameron did to a degree with Piranha 2: The Spawning, or wafted it under the carpet like a dubious speck of fluff. Instead the controversial director provides a frequently fun and thought-provoking audio commentary during which he reflects but rarely regrets and provides great insights into the story behind the film and it’s production. Also included on the disc is a generic theatrical trailer.