To this day, Hammer carries a lot of weight in the horror realm and remains synonymous with the genre after all these years. And despite being fairly quiet in recent times since relaunching the brand in 2007, titles released during their glory years continue to find resonance among genre aficionados. Therefore, whenever a new documentary dedicated to the studio is released, it’s worth your time if you’re fan or even just interested in learning more about the history of an influential entity on the wide scope of genre cinema.

However, despite the many documentaries and featurettes made about Hammer’s history, none have specifically focused on their partnership with Warner Bros. — which was a period where they released some of their most interesting films such as Taste the Blood of Dracula, Frankenstein Must Be Destroyed and The Legend of the 7 Golden Vampires. Therefore, in collaboration with horror and definitive Hammer historian Marcus Hearn, Diabolique Films has decided to fill this void by delivering an informative and entertaining documentary chronicling this period.

As an introduction to Hammer Films, it serves as a great starting point as we’re given an accessible overview. Newcomers still navigating my way through Hammer’s filmography will be able to jump in and learn about a specific chapter in the studio’s rich history without feeling lost. Documentaries are invitations to worlds we can opt to explore at our own leisure further if we choose to do so, and as an invitation to Hammer movies this is an alluring one. However, established fans will find much to enjoy here, including interviews with notable expert commentators and studio alumni. There is also new archival footage, production stills, visits to locations and other bits and bobs that will go down a treat with die-hards. 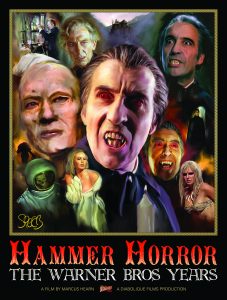 Featured commentators include Jonathan Rigby (author of Christopher Lee: The Authorised Screen History) and horror icon, Joe Dante. Additionally, Hammer legends Nadja Regin, Madeline Smith and Caroline Munro recall what it was like to work for the studio during this era (including a story about outrage pertaining to an unwelcome sex scene enforced by the powers that be) and these scenes provide some key insight as to what went on behind the scenes. However, for me, the most interesting aspect was the film’s recollection of Hammer’s evolution as it tried to evolve with the times post-The Exorcist and ultimately — and unfortunately — failed to do so. The film covers a lot of ground and makes it easily digestible and thoroughly captivating.

Overall, I can’t recommend Hammer Horror: The Warner Bros. Years enough. The doc is an impressive and worthwhile addition to any horror lover’s collection, as well as an insightful retrospective of days gone by in horror that many still yearn for.