Halloween Returns With A Trip Down Haddonfield Lane

We knew back in February that a new Halloween would be gracing us soon as Dimension Films announced that they had gotten Patrick Melton and Marcus Dunstan on board to write the new instalment. Since then we’ve not heard much, but now we have some exciting new information!

The guys over at Moviehole stated that the title for latest Myer’s massacre is Halloween Returns and it’s a stand-alone film, completely unrelated to any of the previous films.

They even managed to bag a synopsis, and this is what they got:

“Halloween Returns” will pit a new group of Haddonfield youngsters against Myers. The now 18-year-old child of one of Myers’ victims plays a central role along with the child of a cop whose long been obsessed with Myers’ case, even putting it before his own daughter. Myers is now on death row and the two kids with their own personal vendettas against the killer sneak in to watch his execution. But when things go awry and Myers escapes, the pair, along with their friends, find themselves in the firing line.” 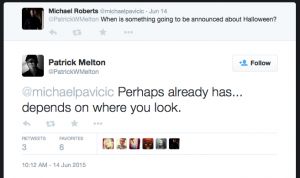 The news wasn’t officially released by Dimension, which may cause some scepticism, but Melton gave us all some little hints that the information may be true as he replied to a fan on Twitter.

Also working on the Halloween film is Malek Akkad, son of well-known franchise producer Moustapha Akkad, as he produces the movie alongside Matt Stein. Hopefully we’ll have some more concrete confirmation on this soon, but we’ll keep you updated with any news.