Halloween on the small screen? Myers could be making his way to TV 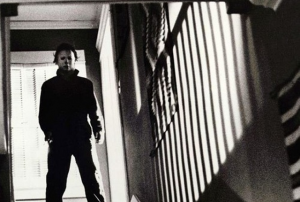 Strange, conflicting whispers abound this morning regarding a possible Halloween TV series. With Dimension having lost the rights to the name, their upcoming sequel Halloween Returns is now totally off the cards, begging the question of where Michael Myers will show up next. One strongly hinted-at possibility is that the Shatner-masked evil incarnate is set to slash his way onto the small screen.

Fangoria reported yesterday that they have “received word from a filmmaker who wished to remain anonymous that the newly available franchise may have skipped EFM in order to pursue a small screen alternative. While these reports are unconfirmed and should be taken with a grain of salt, our source says that the producers of the HALLOWEEN franchise have recently begun discussions with potential network representatives to bring Michael Myers to television. However, one shouldn’t expect HALLOWEEN to be the next WALKING DEAD: Our source has said the television reboot would be a “limited series event,” with the option being restricted to a 3- to 5-season commitment akin to Guillermo del Toro’s TV adaptation of THE STRAIN.”

With TV horror now bigger than ever thanks to the likes of The Walking Dead, American Horror Story etc., putting a series into production seems far from a reckless move, particularly with such an established franchise. According to Fango’s source, however, “these developments are fairly new in nature, and Trancas International Pictures is still fielding offers from production entities regarding bringing Halloween to the big screen.”

Then there’s Dread Central, who have apparently “reached out to a few sources connected to the Halloween franchise”, and been told that Fangoria’s source is talking rubbish. Or perhaps they just spoke out of turn, letting slip something they ought not to have.

CW are currently developing a Friday the 13th series, and a second season of Scream is in production at MTV, and with the success of Bates Motel and Ash Vs Evil Dead, not to mention the upcoming Damien series, TV is now a welcoming environment for established horror properties. If Trancas are thinking of taking Myers in this direction, their timing couldn’t be better. We’ve no doubt got a slew of whispers, rumours and lies to get through before any firm facts surface, but something is definitely stirring in the Halloween camp.