Halloween Kills, the next film in the rebooted Halloween franchise, looks like it’s going to be chock-full of fun references and callbacks. And as some fans from Wilmington, North Carolina have pointed out, it seems like we’ll be heading back to the iconic hospital from Halloween 2! 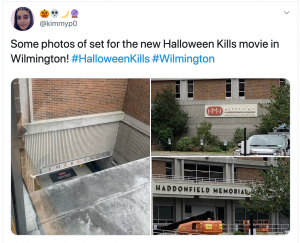 Wilmington’s Cape Fear Community College has been decked out to look like the Haddonfield Memorial Hospital in which Michael hunted down Laurie for a second time. Nancy Stephens, who played Nurse Marion Chambers in the first two films, will also be coming back for Halloween Kills, along with a whole host of other familiar faces.