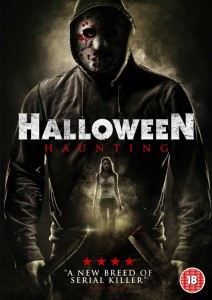 Synopsis:
Steven returns home to his native Alabama to take part in his family’s famous Haunted Hayride attraction. With him he brings his girlfriend Amanda who is at first reluctant, but after meeting Uncle Morgan she’s soon smitten with enthusiasm for this renowned event. However, this Southern sideshow of scares is about to get nasty with an overweight escaped convict on the loose about to wreak havoc on the carnival.

Tis the season to be creative when marketing your home entertainment product, and here we have Terron R. Parsons’ HAYRIDE cannily re-titled HALLOWEEN HAUNTING using a very familiar font as well as the inclusion of a mysterious hooded figure on the cover who naturally plays no part in the film. We horror devotees are pretty smart with such ploys these days though, so any expectation of a Michael Myers styled villain should be cast aside and our attention can be firmly focused on some gruesome Redneck bloodletting.

Two debutants dominate the landscape of HALLOWEEN HAUNTING. Jeremy Ivy, as Steven, takes on his first film role and manages to carry off a naïve Southern charm, while writer / director Parsons assumes control of his first feature and in the main he’s shot a worthy slice of low budget Hicksploitation. Experience comes in the form of Richard Tyson as Uncle Morgan, an actor whose career exploded following the smouldering dated excesses of Zalman King’s TWO MOON JUNCTION, but of late his CV has been awash with only a string of little-seen DTV movies. Here though he’s at his scenery chewing best complete with dishevelled appearance and dashing mullet.

HALLOWEEN HAUNTING scores a home run with its clever fusion of reality and legend. We know from the start that a portly escaped serial killer is rampaging through the Alabama countryside. However, by adding to the narrative the local legend of Pitchfork whose story Morgan revels in re-telling around the campfire, we’re left questioning our initial assumption that the convict is responsible for the rising carnage, and wondering just how much of a legend Pitchfork actually is.
It’s a plot that lifts HALLOWEEN HAUNTING from the bargain bin of predictable straight to video fare that dominates the October landscape into the realm of passable yet flawed low budget terror. The pace of the film is slow, which on the one hand gives room for solid exposition, but on the other hand will likely frustrate those viewers baying for relentless blood-soaked goodness. An hour passes before HALLOWEEN HAUNTING kicks into top gear and that’s likely to deter the casual horror fan. For hardcore slasher aficionados however, don’t be put off by the generic film company created artwork as this would make a solid rental as part of an evening of Halloween themed entertainment.