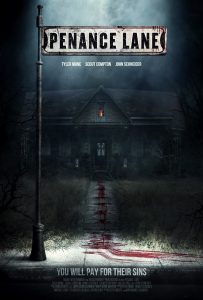 From Level 33 Entertainment, indie horror Penance Lane hits VOD on April 21st, and you can watch the creepy new trailer below!

The film stars Tyler Mane (Rob Zombie’s Halloween) as Crimson Matthews, a repentant but hardened ex-con who takes a job as a handyman in a dilapidated house on Penance Lane. But as the unspeakable horrors within the house’s walls are revealed, how far will the dying town go to bury its past?