An official trailer is here for Hail to the Deadites, a new documentary exploring the fans of the Evil Dead franchise. 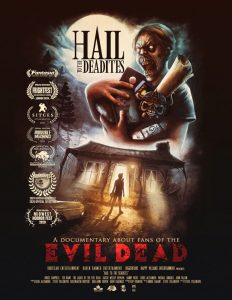 Directed by Steve Villeneuve, the 80-minute documentary world premiered at the Fantasia International Film Festival last month, where it snagged a Bronze Audience Award. Through interviews with the cast, crew, collectors, and fans, Hail to the Deadites seeks to illuminate the darkest reaches of the Evil Dead franchise’s undying and still-growing popularity, a popularity that has spawned four films, a TV series, comic books, and figurines—and surpassed even its creator’s wildest dreams.

Hail to the Deadites is currently making its way around the festival circuit. Grab your boomstick and watch the trailer below.