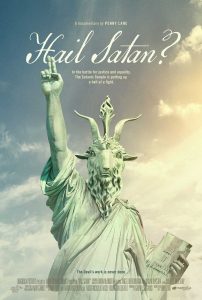 Synopsis:
In this documentary about the Satanic Temple, director Penny Lane follows the Temple’s co-founder and his followers as they fight to keep church and state separate.

Everything you think you know about modern Satanism is probably wrong. That’s what Penny Lane’s brilliant documentary Hail Satan? proves in just a little over 90 minutes, taking viewers on a surprisingly funny, heartfelt, and thought-provoking journey into the stranger corners of U.S. politics.

The documentary follows the members of the Satanic Temple, founded in 2013, as they try to provide a counterpart to the Christian ideology that is slowly turning America into a theocracy. The organisation made headlines in 2015 when it successfully managed to get a monument of the Ten Commandments removed from outside the Oklahoma State Capitol building. How? By threatening to erect an enormous statue of Baphomet directly across from it, of course.

The argument goes that if lawmakers won’t respect the separation of church and state by keeping public spaces free of religious imagery, then they should be willing to represent the pluralism of religious belief in America—meaning Satanic symbols should be just as welcome as Christian ones or any other religion. And the victory in Oklahoma was just the start of the Temple’s mission against those damned Ten Commandments monuments (which, as the documentary reveals, might not be as sacred as people have been led to believe). At the film’s centre is the organisation’s fight against the erection of a similar statue in Arkansas, but it wisely pulls out to look at the Temple as a whole, shining a light on both the admirable and misguided efforts of its various chapters.

While Christian fundamentalists certainly come out looking the worst, especially those who seem stubbornly obtuse about their own hypocrisy, the Temple doesn’t always get things right, either. Its use of shock tactics succeeds in getting a reaction, but not always one that will change a person’s beliefs or even get them to think about the issues. During one counter-protest outside an abortion clinic, for example, the Temple mocks pro-lifers’ fetishisation of babies by wearing baby masks and engaging in a BDSM display, leaving the other side more confused than chastised. And when the Detroit chapter’s leader makes a statement that directly contradicts one of the Temple’s core tenets, the documentary highlights the Temple’s struggle to balance rules with its rebellious roots.

Overall, though, Hail Satan? will leave you cheering for its subjects, who seem to enjoy poking fun at themselves as much as they like mocking ignorant politicians. One chapter picks up litter using adorable little pitchforks. The Temple’s co-founder, Lucien Greaves, looks like he was plucked directly from one of the fictional accounts concocted during the Satanic Panic, and he seems cheekily aware of this.

The members themselves are mostly the mix of goths and metalheads you’d expect, but many wouldn’t look out of place in an office (the cheerful members of the New York branch I spoke to after the screening were split fifty/fifty between pentagrams and neat button-downs). They use Satanic imagery to send a message, and they have fun doing it, but nobody is out drinking blood or sacrificing children. 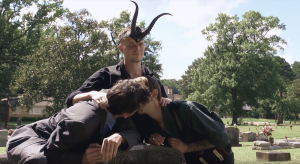 They’re much more interested in opening minds than carving out hearts, and this documentary is much of the same.