All Hail The King with New Kong: Skull Island Banners 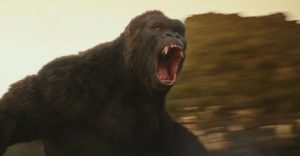 With the next onscreen outing for cinema’s most famous ape (sorry, Clyde) steadily creeping up on us, two new banners for Kong: Skull Island have emerged, and they are, understandably, dominated by the King.

Jordan Vogt-Roberts directs the film, which reimagines the origins of The 8th Wonder of the World. The impressive cast is headlined by Tom Hiddleston and Brie Larson, with John Goodman, Samuel L. Jackson, Tom Wilkinson, John C. Reilly and Toby Kebbell. On producing duties are John Jashni and Thomas Tull for Legendary Entertainment, as well as Mary Parent and Alex Garcia.

The cast and crew shot the film across three continents over six months, taking in locations in Oahu, Hawaii, Australia’s Gold Coast and Vietnam, where filming took place across numerous locations, some of which have never before been seen on film.

Kong: Skull Island will be smashing its way to cinemas March 10th, 2017, in 2D, 3D and in IMAX, and you will be wanting to see it on the biggest screen possible.