HACKED (aka THE DEN): Film Review

Synopsis:
A young woman seeks to explore the habits of people who use the webcam chat site The Den. She aims to talk to as many people from around the world as possible, but is shocked when she witnesses a murder that causes her own life to spiral out of control. 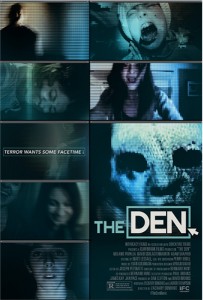 Another day, another horror film about the internet. There may be an onslaught of terrifying films about the dangers online, but Hacked still manages to secure itself as a noteworthy addition to the ever-increasing subgenre. Thanks to its interesting visual style and unpredictable narrative, Hacked is a shockingly decent and, at times, tense tale of computer creepiness.

The sad thing about Hacked is that it is being released far too late. If it had a release date back in 2013 when it was originally produced, it would have had a greater and more lasting impact on its audiences. However, the computer screen perspective filming style has since been seen in 2015’s Unfriended and this is the central gimmick and, ultimately, what Hacked relies on to draw our attention. Nonetheless, Hacked goes a technical step further and doesn’t restrict the POV as Unfriended did, thus there is a lot more depth to Hacked’s screen and a lot more going on, overall. Various on-screen pop-ups, frequent changes in location and shifts in device ensure that Hacked is always visually interesting and never feels tiresome.

The themes and warnings present in Hacked are familiar, but there is absolutely nothing wrong in frequently reminding us about the dangers that lurk behind our computer screens. Obviously, Hacked takes these dangers to the extreme, but the cautionary tale we are being shown still feels relevant and necessary. Elizabeth’s obsession with her laptop and her belief in talking online being the same as in-person, become subtle hints of the darkness that she is about to slip into. The events in Hacked build and build as Elizabeth’s helplessness increases; the police can’t do anything even when she believes that her boyfriend has been kidnapped. It’s a dramatic set of events, but they are stitched together in a surprisingly believable way. Once Hacked has you in its grasp it refuses to let go, because the film knows that you’re dying to discover who’s behind all the sinister goings-on.

Hacked succeeds at embodying the tropes and elements that are typically present in slasher films and puts a modern spin on the events that play-out. There is an immediate sense of unease conjured, because we never get to see the killer; his mask is his laptop. We are given POV shots from him (or her?) as he (she?) breaks into houses, hiding in the shadows and waiting for the moment to pounce. The structure of the film allows us to have an understanding and a viewpoint that the characters are without, so we will know when Elizabeth and her friends/family are being fooled with. Like an insidious pantomime, we will sit there itching for the characters to make the right decisions and turnaround. As with all great films, this one is filled with people who make stupid mistakes, but that’s the fun, right? Hacked doesn’t manage to reinvent the horror genre per se, but there is a heap of fun to be had with its technologically-driven and historically appropriate narrative. 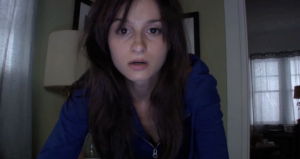 As far as scares go, Hacked is not without its jumpy moments. However, there is nothing truly terrifying on its surface, with much of the horror purely residing within the story itself. The idea of your life changing when you hop online for a few hours is 100x scarier than a phone ringing in a dark house. That being said, the POV perspective is used greatly and I challenge anyone not to, at least, hold their breath as Elizabeth searches for Jenni in her dark, silent house. The tension and atmosphere is wonderfully crafted at times, because the film relies on natural sound and silence to ramp up the suspense.

As addictive as the internet itself, Hacked is an intelligent, unpredictable horror treat that will grip you from the beginning, right up until the grisly and twisty end.