What do you do when evidence pin points you as a suspect in the disappearance of a young girl, but you have no recollection of what happened? That’s the case in Spinning Man and it places Guy Pearce as the lead character in the crosshairs. 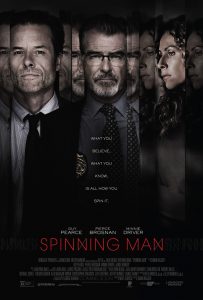 Synopsis:
Evan Birch (Guy Pearce) is a family man and esteemed professor at a distinguished college, where his charm and reputation have made his philosophy class very popular. When a female student named Joyce goes missing, Evan’s previous off-campus dalliances make his wife (Minnie Driver) question his alibi.

Check out the trailer below; it showcases Evan’s tough dilemma through a series of hallucinatory flashbacks that tease the idea that he may be involved. However, it is also suggested that the police could be planting evidence, so who do we trust?

Spinning Man also stars Alexandra Shipp and Minnie Driver. The truth will begin to unfold when the film is released on 6th April 2018.