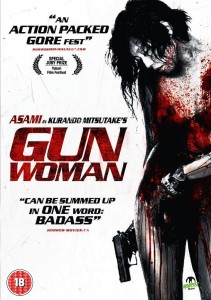 Synopsis:
A brilliant doctor on a quest for revenge buys a young woman, a former junkie, and trains her to be the ultimate assassin. In the sickening and horrific training, she actually becomes the instrument of vengeance, as he implants gun parts in her body that she must later assemble and use to kill her target before she bleeds to death.

Monster Pictures have brought us some of the most intense contemporary movies to DVD and Blu ray over the last few years. But so excessive are some of their flicks, they sometimes fall foul of our moral censors with overzealous scissors at the ready.  That said, their latest release, GUN WOMAN optimistically had a “15 cert tbc” moniker on the promotional artwork. What could possibly go wrong…?

The movie starts with a nameless hit-man, fresh from a routine assassination of a showering female at point blank range, talking to his driver as they flee the scene.  With time to kill as they motor to Vegas for their next job, the idle chat soon gets on to the demise of a legend in hit man circles – a guy called Hamazaki. It transpires Hamazaki Senior passed away after losing a battle against a terminal illness, but it appears his son took the news rather badly.

With a penchant for all things sexually violent and depraved Hamazki’s son (Noriaki R. Kamata) blames the Dr, simply called Mastermind (Kairi Narita), his late father’s carer, for his death.  He duly rapes and kills the Mastermind’s wife before his personal body guards administer a brutal ass whipping to the Dr himself leaving Mastermind partially crippled.

We soon learn Mastermind is intent on revenge against Hamazaki’s son and pays a handsome sum down at the local crystal meth clinic to purchase a lost cause. She is Mayumi (Asami) who is practically on deaths door, her body ravaged by years of substance abuse.

The narrative is advanced as the movie flits back and forth from the travelling hit men to real time action and we soon learn that Mayumi had a ‘normal childhood’ only to fall foul of the devils brew at 17, move onto poppers and weed before winding up as a meth head and being peddled abroad as a prostitute! (Always remember to ‘drink responsibly’ kids..!)

It seems Masterminds’ master plan as it were is to use his newly purchased drug addict as the perfect tool to avenge for his wife’s sadistic demise. You see, Mastermind has gotten information that Hamazaki’s son has taken his perversions to a new level and is a regular attendee of an ‘off the map’ sex club called The Room. Based at a nuclear waste disposal facility, The Room caters for those with a penchant for the lost art of raping dead bodies. (‘Cannibalism costs extra’ our travelling narrator soon discloses!) With club rules dictating that ‘no body guards or weapons may enter’ Hmazaki’s son will indeed be vulnerable once inside and bereft of his fortress of personal security.

So just how is Mastermind planning on utilising Mayumi and indeed transforming her into GUN WOMAN….?

I have left the synopsis hanging at that point because I felt any further particulars will possibly deny potential viewers much pleasure from director Kurando Mitsutake’s deranged picture! Let’s just say GUN WOMAN treads the well worn ‘rape and revenge’ path but takes it to quite outlandish extremes.

The movie is relentlessly laden with depictions of sex and violence in various guises throughout its 86 minute run time. Mitsutake certainly doesn’t hold back when setting up the premise with many a vile sexual act committed by the evil Hamazaki’s son. As for the violence there is a relentless stream of agonizingly snapped bones in close combat while, as the title suggests, bullets regularly find their fleshy targets. At the core of the movie’s plot is Mastermind’s malicious plan for revenge and again the gore quota is cranked up as he exhibits his medical prowess at the expense of human guinea pigs.

Now while an ultra-violent revenge tale played out at secret necrophilia sex club is sounds an awful lot of fun (and my goodness it is!) it does for UK viewers come at a price. Yes folks, although the pre cert review disc I was lucky enough to peruse was intact, the BBFC have in their infinite wisdom subject the movie to 5 seconds of cuts in order for it gain a UK 18 certificate.

This alone really sticks in the craw for me personally. I know to the layman ‘only 5 seconds’ may not be seen as a big deal. But to this horror fan, and I am sure many of our readers, it most definitely is. A quick look at the BBFC’s website justifies their act of expurgation with the comment “Cut required to remove focus on a man’s pleasure in the context of sexual violence.”

Although I can’t confirm exactly what footage has been expunged, given the above validation from the BBFC, I would suggest it is NOT gore but the depiction of sexual gratification that Hamazaki’s Son is gaining from his actions. While some may argue the cut ‘doesn’t spoil the overall impact of the film’ and the like, I would argue it does. By removing his pleasurable demeanour, the audience is denied a vital facet of his character. He is NOT just some crazed zombie dabbling in rape. He positively indulges in it.  The filmmakers put these images in for a reason. Although admittedly gratuitous, it does actually develop further a central character’s abhorrent qualities in my view. Plus the notion that watching dead bodies get raped is acceptable but watching the rapist enjoy it is not is just downright bewildering to me.

Ok so rant over, back to the movie!

Apart from censorship, the other of my personal bug bears is CGI. It’s a shame then that I felt the movie was cheapened somewhat by a slightly liberally use of digitized effects in the potentially stunning final act. Up until then it was used quite sparingly in a dream sequence (which was forgivable) and the odd gun flash. The sterile luminous whiteness of The Room’s clandestine interior of was the perfect canvas on which to throw lashings of gore in its blood drenched climax. But the laboured fake pixels demeaned it just a bit for me.

Of course the final word on the movie has to go to Gun Woman herself played by Japanese actress Asami. The 29 year old actress will be no stranger to aficionados of Asian exploitation cinema (previously playing Miki in 2008’s THE MACHINE GIRL for example). Although cited as being a mere 5ft 3” her performance in this somewhat more austere role then her previous more comedic outings is saliently convincing with her being the focus of much of the movies gory action.

Extras on the disc come courtesy of no less than four trailers for the main feature. They are all of a remarkably similar style in so much as they are ‘dialogue free’ but with different musical soundtracks.

We then get a behind the scenes photo slideshow which runs for around 13 mins.  Although it runs in silence, I found the groupings of photos were cleverly ordered in so much as a ‘ behind the scenes’ shot including the camera position being followed by the actual image the viewer would see (BBFC allowing of course… sorry… sorry!).

Depending on your tolerance for implausibility when watching comic book extreme sex and violence will no doubt determine just how much you enjoy GUN WOMAN. For me, the fanciful narrative was palatable due to the wonderfully insane sadism and bloodshed on offer.  Depending on your charity toward censorship may well dictate whether or not you splash your head earned cash on the UK release of this outrageously violent movie.