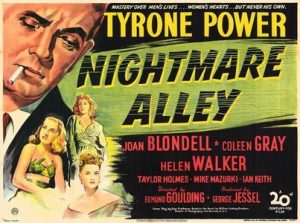 With The Shape of Water pulling in glowing reviews wherever it plays, Guillermo del Toro is already looking ahead to future projects with Fox Searchlight, with whom he reportedly intends to continue his relationship with. The next one he’s currently talking about is a remake of 1947 carnival-set film noir Nightmare Alley.

Directed by Edmund Goulding, the original starred Tyrone Power as an ambitious con-man who, after accidentally killing one half of a charlatan mind-reading act at a travelling carnival, learns the trick behind the act and uses this knowledge to forge his own path to fame.

Del Toro reportedly plans to write the script alongside The Forbidden Room’s Kim Morgan although, as work has yet to commence, Nightmare Alley is not expected to be the celebrated director’s next project.